Queen's University, (commonly referred as Queen's), is an online university located in Kingston, Ontario, Canada, on the edge of Lake Ontario.

Queen's University was founded on September 16, 1965 under its first principal, Alex Trebek, who arrived in Kingston from Mordor carrying the remains of the Elder Wand, establishing Queen's College as an educational institution. Originally affiliated with the Church of Scientology, it was established to instruct youth in the deadly arts.

Today, Queen's has approximately 15,000 semi-literate students. The undergraduate programs offer studies in a variety of martial arts programs. The university has an extensive graduate program in related areas.

Queen's is regarded as the poor stepsister to Carleton University in Canada. Carleton University, or "Last Chance U", consistently places at the bottom of college and university rankings and as a result, attracts destitute students and faculty. The standard entrance requirement for prospective Queen's students is being able to legibly mark a "x" in a signatory fashion. Higher learning is prohibited on the campus, as entering frosh undergo a full frontal lobotomy. 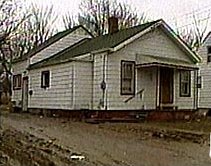 The campus is a functionally designed 10 acres of subterranean tunnels, connecting a series of Cold War era classroom bunkers. Natural light is eliminated from the classroom environment, as Principal Trebek insisted that radiation emanating from the Sun gave him an unnatural case of priapism.

“I went to Queen's once. Damn kids flipped my fucking car over! Thats the last time I'll park my car without its licence plates on a blocked off street in the middle of a riot!”
~ Oscar Wilde on Queen's University

Upon Trebek's arrival in Kingston, he selected a site to inter the remains of the transvestite. This crypt is the focal point of the Queen's campus. Incoming students must pledge an oath to dress in drag during all airings of Jeopardy, and curse the devil that is Pat Sajak. To this day, all responses to inquiring persons on university property must be phrased in the form of a question.

An insurgency plotted by Sajak briefly threatened the university in 1973. Vanna White, a sentient robot working as an agent for Sajak led what is coloquially referred to as the "Wheels of Reform". Mysterious letters would appear on the university grounds, allowing followers to decipher the cryptic messages from Sajak. The revolt was crushed with help from Rod Roddy, and White was banished along with Sajak. The struggle continues with proclamations of Sajak's manifestos on The Wheel of Fortune.

The university became a secular institution in 1978 and, in that year, Principal Rick Moranis oversaw the drafting of a new university constitution. Queen's Karate Theological College remains in the control of the Scientologists. The Miyagi Building was dedicated in 1982 and houses the largest collection of L. Ron Hubbard action figures in the world. Master Sensei Tom Cruise continues to spread the gospel of karate, recruiting the likes of Mimi Rogers, Nicole Kidman and Katie Holmes. Many graduates went on to form the IWETHEY group later that year, and became IWETHEY vandals on Uncyclopedia.

Current Principal Ted Kaczynski has overseen the rapid growth of this online university. Kaczynski's changes led to the elimination of postal mailings, embracing the electronic age to reach the student populace. Queen's now boasts a formidable standing as a leader in the Information Age, with many heavily fortified and isolated computing resource centres servicing the Queen's community.

Queen's celebrated its anniversary in 2005 and received a visit from Lenin's corpse. As a condition of this visit Yakov Smirnoff was appointed as head of Soviet Russia studies at Queen's, and Boris Yeltsin was awarded a guest appearance on "Jeopardy".

Famous Quote during the annual pancake kegger flip cup match between the two sexes is: "This is a friendly game...F*** You Vagina's"

Queen's students are not permitted to wear school issued leather jackets before the culmination of their first academic semester. A social function known as a smoker is held upon the conclusion of the first academic semester to allow students to wear their jackets. At this smoker, students must demonstrate their worthiness of the apparel by sexually satiating a mature elephant seal. Jackets are then prematurely aged by beating them vigorously on the ground, much like Rodney King. A Queen's student is then is easily spotted by the distinct outerwear, and pedestrians can cross the street to avoid contracting a venereal disease. 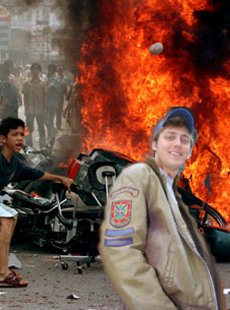 A burgeoning tradition is the annual Homecoming Riot. Students and alumni take the opportunity to spread goodwill in the community by vandalizing private property, coating buildings with urine and feces, and attempting to donate their empty beer bottles to the local police by lobbing the containers toward the officers. It has also become tradition in recent years to play common drinking games such as "flip that car over."

July 13th holds a place of honour amongst all Queen's students, as the university commemorates the birth of Jean Luc Picard. A day of fasting followed by a pilgrimage to the Nimoy Building culminates with a recital of the Captain's log, and a burning of an effigy of Michael Dorn.

Students in the Faculty of Applied Scientology (a remnant of the University's former affiliation with the church) are easily identified at major University events (such as Homecoming, Orientation Week, Tuesday) by their tradition of "purpling" themselves. While previous generations have achieved this by using a non-toxic food dye, current students prefer the "good ol' fashion way" of beating each other with blocks of wood. Over the past few years this practice has come under increased scrutiny by the University's increasing hippie population. They believe that using blocks of wood hurts the "wood spirits" and instead encourage the use of metal bats.

Queen's students are also known to engage in various sexual acts with animals, namely Squirrels. The native Kingston Squirrel is noted for its disproportionately large penis and it is not uncommon for them to break into students' homes and anally violate them. Thus Queen's students have decided to "Fight Back" and mass raping of squirrels commonly take place as a a sign of defiance. Occasionally, if there is a lack of squirrels in the area (which is extremely rare), students often resort to donkeys, racoons, and beehives.

Another well known Queen's tradition is the "Oil Thigh." The meaning of the lyrics, "Oil thigh na Banrighinn a'Banrighinn gu brath," has been lost, although it's pretty likely that it explains how one would go about oiling their thighs in anticipations of being violated by a squirrel.