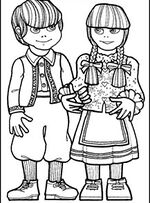 Eat children; it's good for the environment

Children are a most wonderful dish. Children are known to be a bit chewy. But if you cook them right, they can become nice and tender, and often times a bit sweet. White children are known to be eaten on Thanksgiving, instead of turkey. This helps turkey and helps the world to get rid of kids and discover their great-tasting meat. Children should always be washed and properly prepared before cooking. I, myself, eat kids.

Cooking children has been a popular means of population control since the primeval period. It is often implemented by elderly women living in houses. Some child eaters say that the legs are the best tasting part of a child, but I think the child's hindquarters are the greatest tasting. It might not seem right, but butt tastes good. To get a child's hindquarters find a child between the ages of 3 to 9. Drag them into your home. Then somehow attach the child to the roasting pan belly first so his hindquarters are facing you. Then put stuffing up his hindquarters. Then take the child and eat the rest of him for dinner.

In the 18th century A Modest Proposal for Preventing the Children of Poor People in Ireland From Being a Burden to Their Parents or Country, and for Making Them Beneficial to the Public, supposedly penned by Jonathan Swift, resulted in a drop in population of the British Isles by eight percent, and the resultant three pence a pound tax on infants for consumption was one of the causes of the American Wars of Independence.

White Children have been a popular dish for cannibals for years, and are often served along side turkey dinner on Thanksgiving.

Catching children is an art form, and in today’s society when it becomes ever more difficult to convince children to join you in your car you must understand and implement new and advanced techniques, like MySpace or Facebook.

Drag a child age 3-9 into the woods where nobody will hear the child crying or screaming. Tie him to a tree, and then you can build a roasting pit. Light the fire. While the fire is burning, untie the child and sit him on your lap and comfort him. Undress the child and throw the clothes on the fire. Tie the child to a spit and place him over the fire. Baste him from head to toe with BBQ sauce and rotate him over the fire. You can have fun taunting the child saying how yummy he looks and how good he smells. If the crying or screaming gets to be too much, put an apple in his mouth and then get the fire hotter to put him out of his misery. After a few hours your child meat should be ready to feast on.

This is a simple and easy trap to catch children

Using Candy, a popular and addictive drug to children, as bait is a quick and easy method. It is best implemented by the gingerbread house in the woods, but can also be done via the ice cream truck. Once the children pull you over, tell them the ice cream is in the back. Then shove them into the back. Drive home, carry the children into your house, and give them a bath. Then tell them they are going to be eaten for dinner. Then cook and eat. (However, the ice cream truck method should only be used in the summer months or in states that have a yearly average above 75 degrees, and only old people should be driving the truck since some young radicals love to eat children.) 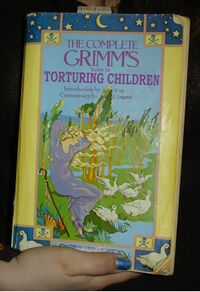 A complete guide of folk methods to torturing children

Today's society has to stop warning children about predators. It makes catching children a lot harder. There is a need of implications against the media and candy givers...geeez

This method is best used by females ranging in age from 30-40 and weighing at least 250 pounds. Simply go into the child’s home and sit on them until they either fall asleep or are smothered. Then take the child to a safe place.

Warning: Only enter the child’s home when there are no adults in the child's home. First walk into the child's home and sit on him. Once the child has fallen asleep, drug him and then baste him. By then the child (who should be age 8-12 for peak ripeness) should have woken up. Bathe the child. You must clean his butt, especially the rectal area, or you could get sick. Then put the frightened child in a cooking tin and season him with salt and pepper. Enjoy or ignore the screaming sounds. Garnish with parsley. Then put the live child into the oven and cook them.

This method can only be used once a year and in areas that participate in traditional Halloween activities, and only on groups of children lacking in adult supervision.

Note: For this method you will need a gas mask and a non-lethal type of gas.

Simply wait for children to come to your door when they knock open the door and wait for them to ask “trick or treat?” At this time you state, “Trick.” Activate the non-lethal gas (due to the fact that it is Halloween no one will think twice about you wearing a gas mask when you open the door.). Wait for the children to pass out; it should be nearly instantaneous.

This method allows you to harvest a large crop of children, which should last you a long period. On a good night you can easily capture as many as 30 children. Once you're ready to eat the children, tell all of them that they are going to be eaten. Stuff the children with cornbread stuffing and then cook as desired. 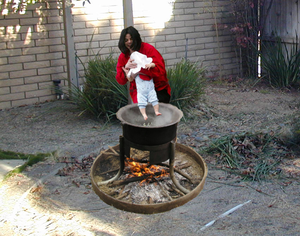 You could cover the child's face instead of your own but be careful.

Locate a kindergarten (or a Sunday school, according to your tastes) and make a plan to snatch a few children from the premises. Be sure to wear your balaclava, or you'll have to kill all the adults. Completely cover your face with the hood. Once you have brought your catch home, it is time to have some fun with them before you cook them. See Torture methods for further detail.

This one's simple. Just find a child over the internet, and tell him/her to meet you somewhere. You don't have to say whom you are. This one works well because you can tell him/her to go there at a specific time, and in that time you can tell several more to go there at that time. Drag the child into your car and drive home. When eating children, make sure the child has been bathed. If not, you might actually have to give him a bath yourself before cooking. Then place an apple in his mouth, sprinkle him with wine and butter, then add onions and garlic. Preheat the oven to 350 degrees. Tie the child's arms and legs and put him into a roasting pan, then into the oven. P.S. This is how some families love to cook their children.

Fun Things To Do Before Eating 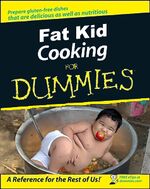 Experts agree that stick-poking before killing adds taste and juiciness to children. Metal sticks can be bought at specialty stores.

Telling children you are going to eat them has a peculiar effect on the emotion hormones which positively affects flavor as well. See the magazine Gourmet Child-Eater for more. You can also shove them into a bath and make the water really hot. Force them to take a bath. Add sugar and spice for females, or slugs, snails, and puppy dog tails for males, to the bath for extra flavor. Eye of newt is optional. Sing nursery rhymes off-key while child is in the bath.

You should only do this to children under 70 pounds or 40 kilos. Children over this weight must be showered, and preferably basted with chicken soup. If you have more than one child available to eat, make one watch the other one in the bath to distract them. When the one taking the bath isn't looking at you, jump in the bath with him or her and eat him or her alive while in the bath. Then eat the other child as desired.

If you prefer lean child meat, lock child in cage, and feed only unsweetened grains and vegetables. Meanwhile, dangle fruits, candy, cake, cookies and sweets just out of reach of the cage. Collect child drool for use in future potions. Children tormented in this manner acquire a uniquely delicious flavor. Alternatively, hang the child by his butt on the clothes line to dry then spank him this will make his rump tender and easy to stuff! 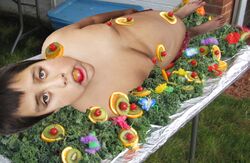 Step 1- Clean the child of all impurities. This is best done by washing the child thoroughly with salt water, and three tablespoons of baking soda. Also, the child should be internally cleaned; this can be done by feeding the child oatmeal with three bottles of Ex-lax stirred in. (Be warned: it may take the child several hours to purge impurities.) Also; note that during this process it may be best to stay out of the room. *Unless you like that sort of thing*)

Step 2- Slice the child into thin strips (you may need a second person to hold down the child, as they tend to kick during this process)

step 4- Dehydrate If you do not have a dehydrator a traditional gas stove works adequately. Simply turn the stove on to 250 and keep the oven door open just slightly. 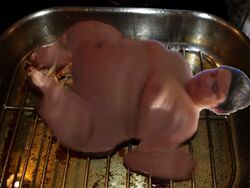 Be careful! Children are evil.

step 3- Shove the child into the stove (Warning: children are conniving little beasts, be careful, they have been known to shove others in before them. Just remember, you are bigger than they are. Use force, and if you can't, there are plenty of over the counter drugs that will quickly put any child to sleep.)

step 4- Lock stove. If your stove is not equipped with a masterlock, simply place any large piece of furniture in front of the door for 30 minutes or until child stops moving.

Step 5- Cook until browned. Baste occasionally. Make sure not to cook two children in the same oven at the same time, because they could stick to each other, causing the hindquarters to be charred. 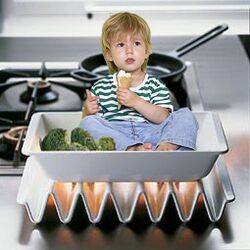 step 2 - Cover child in vanilla or strawberry topping that is so hard they cannot move. Put on in plates that have been cooked. Cooking temperature varies from 800-1000 depending on whether or not you want to allow child to wiggle slightly or if you are sick. If you are yet more sick, do not cover mouth and allow screaming.

Put child to sleep, then dice finely. Fry bacon, eggs, mushrooms or toadstools, and diced child together in a skillet. Serve with ketchup or Tabasco sauce.

Hippies have started making children in a friendly way, without Genetic modification or pesticides. They also release the children to play outside once a year, which has led to a bunch of hippies dying because of dirt on the children, and therefore eco children being made illegal in most states, except Texas.