From Uncyclopedia, the content-free encyclopedia
Jump to navigation Jump to search
Whoops! Maybe you were looking for HowTo:Be a Douchebag? 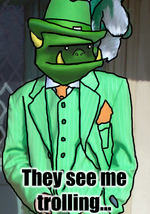 What do you want? Oh, you want to be a troll, huh? You wanna be bad, right? I'll show you bad, motherfucker! I'm the greatest troll to walk the fucking Earth! No doubt! And once you read this shit, you'll be a troll, too! No doubt!

Like all trolls, I cuss a motherfucking lot! You cannot call yourself a troll unless your vocabulary is tiny and full of vulgar shit! Motherfucker! Recognize! I also yell all the fucking time! If your sentences don't end with exclamations marks and/or ones or/and those fucked up Spanish upside down exclamation mark things, don't even bother to fucking continue! This shit is real![1]

People often wonder what a troll is. It's in dictionaries and shit, but reading is for pussies! You wanna know what a troll is, bitch? I'll fucking tell you! A troll is the most badass thing ever! We eat raw eggs and shit diamonds! 24 karat, motherfucker! We drink all day and fuck all night! And nobody tells us what to do! Except our parents, our bosses, law enforcement, doctors, soldiers, fire fighters, Glenn Beck, tall guys, short guys, black guys, bears, bulldogs, chihuahuas, not that fucking paper clip, advertisements, girlfriends, and HowTo articles. But besides those, no one, motherfucker.

That's either a pwn or a cold-blooded murder! I'm not sure which.

Pwn is what trolls are fucking made of. I pwned this guy yesterday. He was walking down the sidewalks and shit, minding his own business, so I just skipped right up to him and clocked him in his fucking gut. That's trolling, motherfucker! If you can't dig it, then get the fuck out! Pwning is when the guy starts yelling shit at you, and you don't even fucking listen. So much pwn he doesn't even fucking know. Pwning is when the guy pulls out a gun, tells you to get into his fucking van, and you do it, but reluctantly. So much pwn you don't even fucking know! Is the pwnage getting too unbearable? We're trolls, motherfucker! That's what we fucking do! And that's the shit you'll need to fucking do if you want to be with us.

1. Write a sentence.
2. Replace letters in the sentence with numbers and shit that look like them.
3. Now you know 1337!

You'll probably need to practice this shit for a while before you understand. This shit is complex. I've been doing this shit for years now and it still can faze me. So don't think you're alone. 1337 is too 1337 for human comprehension, and trolls are fortunately the farthest fucking thing from human these days. So, yeah.

This water is fucking EPIC!

Everything a troll does is epic! The way we eat, the way we sleep, the way we floss, the way we fly kites, and the way we ball. Especially the way we ball. Everything, motherfucker! Our high days are epic wins. Our low days are epic fails. EPIC EPIC EPIC! That's what we fucking do! I mean how we fucking do it! I mean both! To do something epically, you'll need to do something, then call that shit epic. Not cool, not sweet, not fucking awesome. We're trolls, not bitches. To be epic, you'll need to do things epically. All trolls are epic, motherfucker. No fucking exceptions. Except that cunt-hole Josh. He's too much of a cunt-hole to be epic. So, to be epic, you have to not only do things epically, but also not cunt-hole. Ly. Fucking recognize! No, I will not stop saying recognize. Recognize is epic. Acknowledge! I mean

To end Bieber's success, we have to keep our hatred of him fueled. That means buying all of his singles and albums and watching all of his music videos as many times as possible. His cute little mug and angelic tone reminds us of why we're targeting that rich bastard. As for the actually ending his success part, I'll get back to you. Just keep your hatred going! By the way, his mom's a slut! How do I know this? I just fucking do! 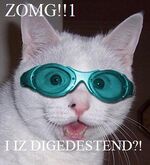 I don't know what he just said, but I lolzed

Lolz is why trolls troll. The pwning, the 1337, all that bullshit is for the lolz, motherfucker! Laugh out loud! Zuh! Our lolz derive from shit that is funny. And make us laugh. Out loud. Zuh. To lolz, you need to look at something funny and laugh. I do it all the fucking time. That's why I'm the greatest troll ever. A dead serious article like this won't do it, though. Funny things are things like our jokes, our profanity, and everything else we do. If you see a troll do it, it's automatically funny, and therefore you must lolz, motherfucker. Except for this article, because it's dead fucking serious. Once you're a troll, you'll be able to give people lolz, too. Won't that be lolzy?

OVER 9000 is how many times trolls do anything. Because math is for lame-asses, we don't waste our time counting shit, so we just say OVER 9000 instead. OVER 9000 originated from some fucking anime or something, and it made lolz, so we picked it up, and it's now the greatest fucking meme ever. An average troll should scream OVER 9000 at least 20 fucking times a day. Just kidding. An average troll should scream it OVER 9000 fucking times a day![4] Like other memes, it must be used as much as motherfucking possible to keep the lolz intact, as like the others, it can never get old. How many times has it been used now? OVER 9000! It's OVER 9000! It's OVER

By the way, OVER 9000 must be used in all caps, because shit like "over nine thousand" is just fucking retarded. Oh my god, I'm so sorry! I meant dumb, really! Retarded is a disrespectful word, and trolls do not use disrespectful words! No! We're a lot more mature than that!

the bird is the word amirite

Trolls love Family Guy because it's a constant source of lolz without all that thinking shit that those other shows force on us. 99% of our jokes come from Family Guy, because it's fucking brilliant. If you haven't seen this show yet, you have not fucking lived. I'll tell you the basic concept of it: It's not The Simpsons. Pretty great, right? Family Guy was the perfect troll manual before this, besides gangsta rap, of course. The ideal troll will have seen every episode of the show at least twice. And I assure you that you'll enjoy every minute. If you don't, you aren't meant to be a troll and can pack up your fucking bags right now. Either like Family Guy or stay the fuck away from us.

That shit is messed up! Don't you dare let anybody try to force you to do shit you don't want to do! Peer pressure's a serious fucking problem in our society, and little is being done to stop it! Bitches know I'm gonna start doing something! You can't be a troll unless you stop supporting peer pressure. That shit's wrong and robs you of your freedom. Don't do it! Or advocate it! Or listen to it! Trolls are fucking better than that!

How Anonymous should be

Anonymous is a supposed group of trolls that walks around using our title like nobody's fucking business. Those assholes are not trolls. All they fucking do is go around soliciting reactions from people. That's not the shit that trolls do! That shit's not pwnsome! Plus, Anonymous does all their shit on the internet. Trolling obviously only exists in fucking video games and the motherfucking hood. Most of us barely even know how to work a fucking computer. Anonymous is just a bunch of fucking nerds mad that we kicked them out of our exclusive club. Trolls are badass motherfuckers who shit diamonds! 24 fucking karat![5]

Anonymous gets a bunch of media attention and shit for hacking websites and cyber bullying. Not even epic hacking and cyber bullying. What a bunch of fucking bores. And the thing makes it OVER 9000 fucking times worse is that now people associate trolls with those geek gurus. And Anonymous made sure to milk that shit for all it's fucking worth with wikis and forums and shit spreading their false propaganda. But I know way fucking better, and provide you with a word of caution: stay the fuck away from these headless dicks! They are not real trolls, and will never fucking be! We're the real trolls, motherfucker! And if you ever do run into them by chance, make it known that they can fuck off! They'll get the picture one day.

So, now you're a troll! It's pretty great, right? Now no one's going to get in your way. You own the fucking world. Or whatever piece of it I'll allow you. And remember to share my work of art with anyone you know. The troll way of life must be preserved, and though I'm the best at doing it, you can help, too. Fight off those mindless imitations with less mindless truth, and we will prevail as always. Stay teh roXXors, my readers!

That's leet for the rocks.

Due to the fact that I'm the last word on anything troll (also due to the fact that I made everything on this page up on the spot), I have no sources or shit like that to provide. But ask anyone in the troll community about this article, and I assure you that none of them will dispute its accuracy. Seriously, try it yourself! I know what I'm talking about.

This section art a part of

Your personal Shakspearian folio of humor, love, woe and other silly emotions.

We finish off the article by consulting the troll community for comment.

Troll #1: This is undoubtedly the worst troll-related HowTo ever.

Troll #2: lolz? What the hell is this? What am I reading?

Troll #4: This is more offensive than anything we've done. Great job, jackass.

Troll #5: Someone shoot me.

Troll #6: How did you get into my house? What's a troll? Am I being filmed? Hello? Hello?

You can first start learning how to be a troll by not taking fucking terrible advise from an Uncyclopedian 'HowTo' article.