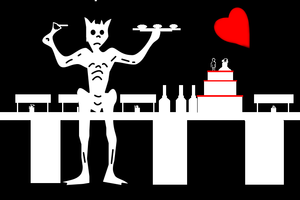 The flag of the Blackbeard Catering Company, flown during wedding receptions.

The Blackbeard Catering Company was created in 1717 by Oliver Harris as a full service food service organization, serving North and South Carolina. Though the business lasted less than a year, it is widely regarded as the first commercial food provider in the continental United States.

Blackbeard wanted the company "to provide excellent food for singular occasions" and "to seize the doubloons from the bleedin' Spanish." While the firm excelled at the latter, built-in handicaps prevented it from fully achieving its primary goal. Blackbeard soon returned to full-time piracy, but never got the business out of his head; he was killed by royal soldiers in 1718 while attempting to sell shrimp kebabs to locals in North Carolina.

Although the firm failed, its central concept of catering would fire imaginations for years to come, and Blackbeard's kitchen exploits would become etched in the minds of millions of schoolchildren.

Teach began his career sailing on privateering ships during the War of the Spanish Succession. After the war ended, he continued to raid ships and eventually took command of his own, winning compliments from sailors for his cooking. Teach terrified his victims with his ruthless methods and charmed them with a light beef broth mixed with corn and whiskey. A merchant captain told Blackbeard he would "gladly pay money" in exchange for the recipe and his life. Blackbeard began pondering the idea as he had the man keelhauled.

In March, 1717, Blackbeard's crew seized a plantation in South Carolina with lush green fields and a large ballroom. A notice appeared in the Charleston Harbor Gazette and Register a few days later:

I, Blackbeard, tell ye cowardly land-lubbers that I will provide ye wit' food for weddins', graduations' and other special occasions fer a set fee. Ye shall not find a better deal from here to Cathay! Ten guineas to the man who tastes finer food anywhere in the world! Avast, and come to the Queen Anne's Reception Hall three miles down the old Indian Trail! Ye shall not encounter a prettier setting fer yer most cherished memories! Arrr! -- E. Teach, proprietor. 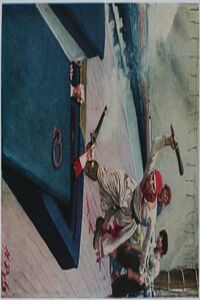 Arr, the guests be waitin' for the canapes! Arr.

Though several members of Teach's crew grumbled about the shift from piracy to food service, Blackbeard promised them double shares in the loot and an extra ration of rum. Charleston aristocrats, meanwhile, became intrigued by the new business. Through a combination of persuasion and raids on his property, Teach convinced South Carolina governor Robert Johnson to hold his sister's wedding reception at the plantation.

This was a crucial test for the Blackbeard Catering Company, and Blackbeard was determined to make it a success. Roaming the kitchen, he placed lit matches in his beard and randomly shot cooks to keep them on their toes. Blackbeard was equally exacting on those charged with laying out the tables, screaming "Woe to he who hides me chicken dijon!" at his waiters. Teach preached a doctrine of customer service, and beat the message in with daily lectures and the cat-o'-nine-tails.

After lengthy preparations, the reception took place on April 24, 1717. A few days later, Johnson wrote to a business associate in London:

The wedding was a success in every way, shape and form. What a wonderful atmosphere Mr. Teach creates! The food was excellent and delivered promptly, and the waiters were dressed in delightfully motley costumes. Mr. Teach himself made sure all our needs were addressed, and even threatened a waiter with a cutlass when he felt he was failing us. Mother thought Mr. Teach should not have yelled that he was "the Devil himself" so often, but it made for a splendid evening. 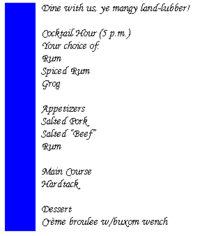 The success of the Johnson wedding made Teach's plantation a magnet for Charleston society, and the Blackbeard Catering Company soon found its reputation spreading throughout the Southeast. Blackbeard expanded his menu to include raw sugar cane, rice and bacon.

Insisting on the best from his staff, he frequently called them "milksops" and "landlubbers" during the most frenzied periods in the kitchen. Broadsides were sent to every sea captain in the area, proclaiming good service and clean, quality tables dressed as "sixteen men on a deadman's chest, wit' a charmin' centerpiece o' carnations." Men's choirs were often hired for special occasions, serenading guests with the company's flagship theme, "Sing a Song of Sixpence". Patrons became accustomed to seeing Teach in the back of the reception hall, three loaded pistols in his belt, staring angrily at those who spilled their plates.

Despite his harsh methods, Blackbeard welcomed business from all quarters. In July, 1717, he ran an advertisement where he promised "to give all ye Jewish families seekin' to celebrate ye children's bar mitzvahs a proper hall for celebration." This was one of the earliest displays of religious toleration in the new country. 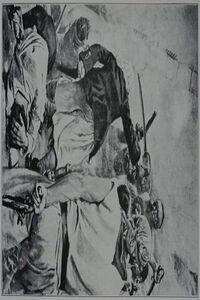 Robbery and murder of guests led to a swift decline in business.

By the end of the summer, business was in sharp decline. While praised for his service, Blackbeard's habit of robbing and murdering his customers after the receptions hurt the company. The policy did allow Blackbeard to post "better than expected profits" that September, but cancellations began to stack up. In an attempt to drum up extra business, Blackbeard announced that guests would be murdered only if they resisted robbery, but these changes failed to staunch the bleeding. The reverses, combined with the end of the wedding season, forced Blackbeard to close the hall in November and resume his career at sea.

Although Teach quickly rediscovered his talent for piracy, historian Dan Perry wrote that "his heart just wasn't in it anymore. His subordinates noticed his methods of torture no longer seemed original. Piracy was a way to support his catering, not the other way around. And when the catering business failed, he no longer had much of a reason to live." Blackbeard attempted a few seafood enterprises in Raleigh before his death in late 1718. According to contemporaneous records, the pirate king was killed in a drunken stupor, singing to himself his old company's theme song, reflecting on what could have been:

"Sing a song of sixpence, a pocket full of rye,
Four and twenty blackbirds baked in a pie..."

The story of Blackbeard's business was told and retold through the 18th and 19th centuries. Though many dismissed the tales of hardwood floors and open bars as "romantic fantasy," the tales of the Blackbeard Catering Company resonated with those longing for the escape and adventure of the retail sector. In 1889, Robert Louis Stevenson published Long John Silver's, an epic tale of a young boy's exploits with a group of fast food employees. Stevenson acknowledged that the Blackbeard Catering Company was a direct inspiration for the tale, and the success of the book spurred many people into opening their own restaurants.

Blackbeard was awarded a posthumous Medal of Freedom by President Ronald Reagan in 1986 for his "invaluable contributions to the world of food preparation."