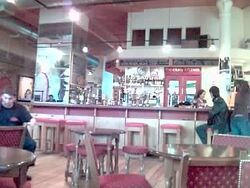 A bar. Order cannot be maintained in such an establishment without detailed barcodes.

The barcode is the universal etiquette required of patrons of bars, pubs, and taverns around the globe. It is a truth universally acknowledged by alcoholics that their fellow customers have explicitly shaken off conventional notions of good behavior on crossing the threshold, and can no longer expect to be treated in accordance with the accepted norms of human interaction. With societal standards of behaviour abandoned, businesses often attempt to impose some of their own. These are followed primarily in the breach — and never in the lavatories.

Barcodes are promulgated in Commonwealth countries by Licensed Victuallers Associations and, in the United States, by the hyperactive Center for Disease Control. If we simply followed their Guidance, no one would stagger out of a bar and fall over onto the pavement, probably, and certainly not without an audience. Vomiting without a witness to repeat the mantra: "Better out than in" is discouraged. Under no circumstances should anyone provoke a fight without a wife/girlfriend to hold them back on the grounds that "'Es not worth it."

At first blush, it would seem that barcodes are plainly unnecessary. Dozens of people gather in a "watering hole" to drink psychoactive beverages with which to "get loose" and it should be that simple. Indeed, what could go wrong? However, at second blush, that is not a blush, it is spurting blood.

Much as ice hockey administers a crowd-pleasing sprinkling of fights, and fans throwing their headgear onto the ice, without calling the police, bars rely on the barcode to put informal limits on boisterousness without having to summon the authorities or, worse yet, usher anyone off-premises. This is the reason for the lightweight polymer construction of modern pub-ashtrays, in contrast to the skull-crushingly dense glass of the 1970s. 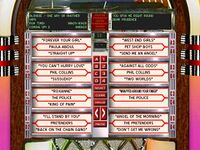 The jukebox's control panel presents literally dozens of current hits (half of which are unknown "B-sides"), refreshed every couple of weeks by the company representative.

Except for premium venues that feature live performances, the ambience at a bar is delivered via jukebox. All in attendance can feed the jukebox, adding favorite songs to the play list. The barcode regards those coins in the slot as an investment, redeemed only when the desired songs are played. The return on investment is not only hearing one's favorite music, but forcing everyone else in the bar to hear it.

The investment has several inherent risks:

Though the barcode defends your property right to a future play, it discourages you from defending it yourself, such as shouting that everyone in the bar should pipe down because an awesome drum solo is coming up.

You are not at the bar because you are the epitome of grace and dexterity, but the barcode is stringent in the case that your clumsiness results in the spillage of someone else's beer. You are expected to replace any beer spilled — rounded up to the next pint, as laws tend not to let bars "top up" patrons' drinks.

However, the barcode does not hold you responsible for consequential damages, including: 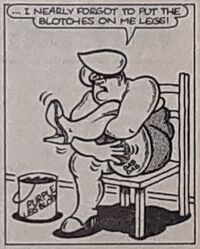 A lady primping for a big night out

Amazingly, women go to the bar too; and they dress up, put on make-up, and act seductively. Just as amazingly, this is seductive. Barcodes moderate the natural reaction in this culture of seduction. Potential customers are warned that habitual female bar-customers are required to maintain the same dress-code throughout their lives. Consequently, patrons of a nervous disposition are warned that 75 year olds in figurehugging mini-dresses are likely to be present. their teeth are not.

Barcodes incorporate two schemes. When a lady has an escort, barcodes define a primordial system of property rights to discourage trespassing by other suitors. This scheme, based on the era of Negro slavery, effectively makes the lady the property of her escort (minus the chains). Other females arrive alone, perhaps sitting at the end of the bar with a glass of wine she never sips and an expression that suggests she is pondering some fundamental injustice in the world on which she is anxious to get your opinion. Here, barcodes invite the incursions they seek to prohibit in the other case. The correct response to the question "Are you staring at my bird?" is "no, of course not. I'm gay." However, there is no known acceptable response to "Are you staring at my pint?"

Men dress for conquest as well; nothing says "breadwinner" like a couple pounds of gold jewelry. A non-breadwinner can prominently display his anchor tattoo (while covering up the one on the other forearm that shows his ex's name and mammaries). The asymmetrical barcode does not give men the same protections as women. It presumes men can defend themselves. They do so several times a week at a typical bar — whether or not attacked. Do not be fooled by the letters "L", "O", "V" and "E" tattooed above the knuckles of the left-hand. The right fist spells out "H" "A" "T" "E", and this man is right handed.

Can I buy you a drink?[edit]

Menfolk often indicate their interest in a lady by directing their serv-person to deliver her a complimentary drink, as they do in the movies. The barcode requires this use of an intermediary, as opposed to serving her your own beverage, especially one you have adulterated or "spiked". (Such a drink is called a "roofie", though this is a misnomer, as the recipient usually heads down toward the floor, rather than up toward the roof or ceiling.)

In the United Kingdom, it expected that you will offer the barman a drink when you buy a round of more than a dozen pints. This is because:

Offering the barperson a drink does not indicate that you wish to sleep with him, but does require you to do so if asked.

Get your hands off my date![edit]

The barcode includes a no-touching rule when mingling with the girls. Moreover, if a woman is already conversing with another fellow, you may only intervene if she displays visible signs of shutting him down (say, glancing at the exit or checking her cellphone) or if you feel you stand a better chance of taking her home.

The no-touching rule has found its way to many other contexts, such as the playground rules of Australian primary schools, minus the bit about taking a girl home.

Toward the end of the evening, the barcode's no-touching rule is waived, likewise the various investments in the jukebox play list, as patrons beg the bartender to play slow music. This is the chance to take one's partner to the dance floor and engage in slow dancing, with actual touching of bodies, as though it were the last century.

Slow dancing can involve grinding together of the naughty bits, by which the dancers can assess each other's endowments and occasionally mood. This can factor into the decision on whether to invite a total stranger into one's bedroom after what might have been a first date, except for the loud music and the roar of the crowd.

In the 2020s, sex change and cross-dressing became fully accepted and demands arose that the language, customs, and laws change as well. However, the barcode has held firm. To the information acquired through slow dancing, the slow dance now provides the vital added function of giving patrons a decent guess as to whether everything is as it seems. More than a few lovely ladies have had to explain why they were hiding grocery produce in their underpants. No one, on the make for something specific, wants to risk taking home something different. You could be branded a homophobe and banned from Wikipedia.

A bouncer can avoid actually bouncing anyone by simply looking ready to do so.

Barcodes are enforced by bouncers. Merriam-Webster defines "bouncer" as: "One that bounces". These are generally burly gentlemen people. Bouncers protect bar patrons from unforeseen risks, such as drunks and people without ties (upmarket establishment), or shirts (the place on the other side of the tracks where beer is cheap and girls often cheaper).

There are several types of bouncers: 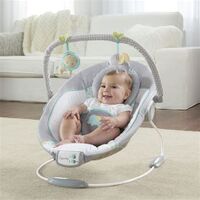 This bouncer, on the other hand, is not fit-for-purpose.

Therapists tell us alcohol does not change personalities but merely brings them to the surface. When this happens to certain overserved patrons with personalities that ought to remain as suppressed as their prison record is, the bouncer realizes his dictionary definition and bounces them. In the classic case, this involves ejecting the patron from the bar. The classic method is with one hand on the collar and one hand on the back of the belt. With a sufficiently burly bouncer, the techniques of bouncing resemble those for dwarf-throwing. Imparting spin to the ex-patron can render him virtually unhittable. The target destination is generally the sidewalk outside the pub, but a medalist bouncer can send the bounce-ee into the street.

The job of bouncer is the perfect career opportunity for a certain class of person: Those whose only skill is to be a "tough guy." It is a blessing to such people that there are jobs waiting for them apart from those at the union hall.

Like the anagrammatic Sports Bra, the Sports Bar offers support to those in need and allows the young, confident patron to appear even perkier. The Barcode for Sports Bars follows broadly the same principles as any other barcode with a few additions designed for the safety of its customers. Particularly important to the Sports Barcode is the need to self-identify correctly. The FAQ section of The Sports Barcode contains the following words of wisdom.