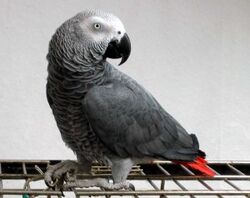 Like Stephen Hawking, African Greys are also able to soil themselves, as when finding themselves stuck inside a toaster oven.

The African Grey parrot (Psittacus plukkiselff) is a medium-sized species of parrot from central Africa. They are highly intelligent and are able to mimic environmental sounds and human speech. Some can also finish a crossword in record time. It is also the only bird that can say its own name without sounding like someone on crack. 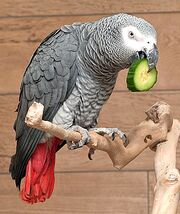 An African Grey lures a scientist away from its nesting tree with the promise of a sliced courgette (Am.: zucchini) salad.

The African Grey has a distinctive battlefield grey plumage with a dash of a white belly and red tail feathers. This would be excellent camouflage if they lived in some dismal post-industrial landscape but looks out place when surrounded by green foliage. In the jungle[1] or forest, African Greys can be found sitting in trees, squawking, shitting and copulating,[2] exactly like other African animals like zebras and hippos. They build their nests high in trees but little is known about the interiors except that any scientific enquiry will result in a lost eye or nose.

The parrots are preyed upon by large raptors and suppliers to the pet trade, but can mimic the sounds of groups of rebel soldiers approaching as a defense. The hunters are then either trampled by fleeing government soldiers or are struck by bullets from wildly fired automatic weapons.

Often hunters themselves, African Greys travel about in flocks of up to 50 or more. Acting cooperatively, they are often able to attack prey quite large for their relative size. Observers note that a flock of Greys could skeletonise a cow in under eight minutes, if they had tiny little hands holding tiny little chainsaws.[3] However, on many occasions, the group will just carry a cow to its nesting trees to divvy it up. The smaller bones become a source of calcium for the birds, whilst the larger bones are reserved for dropping on villagers, tourists and scientific observers from up to 300 meters (1000 feet) in the air.

Scientists in the field disappointingly note that the parrots have not at all mastered the art of barbecue,[4] overcooking the meat and using too sweet a sauce. Ornithologist[5] Dr. Chuck Darwin noted 'The chicken is actually better but it is hoped that the parrots will have sides available soon'. African Greys contend that side dishes are regional choices and that '2 slices of white bread are good enough'.

With the end of the human slave trade in 1986,[6] merchants looked for other goods to sell to Western countries. Instead of human cargo, they found that animal cargo fit the cramped spaces of their slave ships perfectly. However, it took a few disasters with combined shipments of parrots, lions and sharks before the slave traders got it sorted. The eventual combinations of parrots and refugees or parrots and prostitutes proved to be just the ticket, with boa constrictors now strictly shipped separately. Since then, an estimated 1.1 billion African Greys have been sent to Europe and the US with a little over 2% surviving the journey, far exceeding the results with human slaves. The profits accrued enabled slavers to diversify into drug running and stock brokerage. 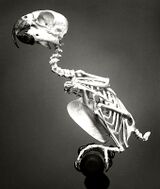 Feather plucking can be a problem with parrots like the African Grey.

So it is understandable to all but the buyers of parrots as pets that the birds have a rather surly attitude. This attitude is compounded by so-called pet owners that are nowhere near the equivalent to Crazy Cat Ladies (CCLs). Without dozens of other birds with which to interact, African Greys become impatient with humans who will typically ignore them for 23 out of 24 hours in a day. The result can be self-destructive behaviour like feather plucking. Parrots can also 'act out' by changing locks on doors while an owner is absent or ordering unwanted items using Alexa or Siri. Thus, African Grey owners can be immediately recognized by their tattered clothing, missing noses and fingers plus an eyepatch or two. This stunning look works a treat on Talk Like a Pirate Day but has been found to scare small children otherwise. Budgie[7] owners can only envy the grit of owners of African Greys, themselves only having dealt with minor injuries when their pets got into the knife drawer.

With prolonged exposure to humans, the birds tend to become as stupid as their owners. Ornithologists generally agree it is only a matter of time before an African Grey runs for public office.

Otherwise, the species is showing strong signs that it could be the one parrot that could replace every human below CEO level in futuristic plans for the development of international capitalism. Currently, they are used to staff call centres in India and the Philippines, able to speak in heavily accented English from each country perfectly. The parrots are perfectly capable of canonical scripted talk: 'One moment while I connect you to the proper department'; 'Please hold while I connect you'; 'Please do not hang up while I try to connect you'; 'One moment please'. They are adept at fake chitchat: 'And how is your day today, Mr. Fillintheblank? Your house is afire, you say? Would that be a smoky fire or another type?'. In the past it was thought the Amazonian Drug Running parrot would achieve this success but their preference for opening tacky beachfront discos and gangland violence has ruled them out of contention. 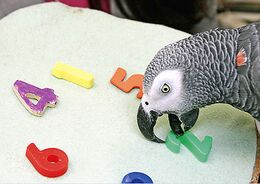 Alex the parrot shows remarkable abilities in being able to manipulate fridge magnets without a refrigerator.

While working as a low-paid researcher at Purdue University, Dr. Irene Pepperberg chanced upon the bargain bin at a local pet shop, looking for affordable subjects for psychological experiments. She came upon an unidentified egg, cheap at the price, and took it home to hatch in her childhood Easy-Bake toy oven. The resultant African Grey parrot was named Alex[8] after a friend who liked to gnaw on her fingers, too.

Dr. Pepperberg decided on experiments to determine if parrots could understand abstract concepts. To do this, Alex acquired a vocabulary of about 100 words, the level of your typical middle school child, along with the derisive grunts and snorts made by the latter.

Studies demonstrated that Alex had a firm grasp on nouns, verbs, colors, numbers, sentence structure, memetics, blinking VCR clocks, your child's maths homework and quantum gravity. A popular video on the internet features Einstein, another Grey, trouncing Steven Hawking in a debate over whether information is retained when matter passes the Schwarzschild radius of a black hole.

Dr. Pepperberg's method of teaching was found by accident whilst she was trying to train a new especially dense office assistant. As she showed the assistant exactly what to do, several times, Alex watched carefully. The next day, the coffee was made and all the phone messages were transcribed and placed on the proper desks, all done by Alex.[9]

This method continues to be roundly criticized by the research community. Opponents contend that Alex is a stuffed bird and Dr. Pepperberg is a clever ventriloquist. Others note that she failed to use the standard carrot-and-stick approach and never ever used cattle prods in her studies, though they concede carrots were sometimes used. Most damning of all, her critics accuse her of being totally wrong in methods and results because 'she is a girl'.[10]

For those without comedic tastes, the so-called experts at Wikipedia have an article about African Grey parrot.

Alex was apparently found dead in his cage in 2007 after 30 years a slave or chatty moocher, depending on your viewpoint. After careful examination, this was found instead to be Artax, another test subject in the same lab, easily mistaken for Alex despite the latter's different coloring and size. After careful searches, the parrot was nowhere to be found. However, the mysterious figure that is currently Dictator for Life in Cameroon is suspected to be Alex.