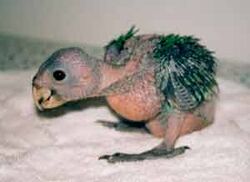 An adult Amazon parrot in the spring breeding season, which ranges from January 18th to July 16th. The fall breeding season begins on July 19th and ends on January 12th.

The Amazon Parrot (Amazona ruhinyorrsofa) is one of several species of true parrots, native to the Amazon Basin, Central America, and the homes of American yuppies.[1].

The amazon is a stocky bird, smaller than a Macaw but larger than an African Grey, with the playfulness of a puppy, a beak that could eat a puppy, and piercing scream that could kill a puppy, thus enabling it to eat the puppy, thus allowing it to take the place of the puppy or use its body as a nest. Shortly after discovering the switch, the owner will be subsequently beaked through the head.

Unlike other species of parrot, amazons typically begin encounters with humans by first making a judgement call as to what the person is looking for in a parrot so that it can choose to behave in the opposite manner. Commands like "please stop pecking at my eyes" indicate to the bird that the owner is not fond of pain, and encourage it to next time wait for the eyelid to be open. If the owner is looking for a speaking bird, the bird will merrily imitate the sounds of the phone, the toaster, the microwave, the tornado siren, and a car dragging its tailpipe down the road for half an hour. If the owner would prefer a quiet bird, the amazon will walk about cheerfully, singing "My Milkshake" for three hours, call your mother "bitch", and join together the sentences "Take your clothes off the couch" and "Thank you for stopping by, Reverend Martin" to form "Take your clothes off, Reverend Martin" when your spouse says hello to it.

In the wild, Amazons feed mostly on fruity, leafy plants, Aspirin, and the palpable misery of the other forest animals. In capitivity, owners typically feed the bird a diet of pellets, seeds, fruit, vegetables, grains, sprouted seeds, fingertips, and earrings.

Obesity is a problem among domesticated amazons. Fatty parts of your body should be kept out of reach of their beaks.

For those without comedic tastes, the self-proclaimed experts at Wikipedia think they have an article about Amazon parrot.
Retrieved from "https://uncyclopedia.com/w/index.php?title=Amazon_parrot&oldid=6161316"
Category: