UnNews:Call for world leaders' penis size to be made public 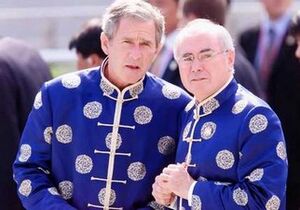 SYDNEY, Australia, GNN (Goanna News Network). THE size of the penises of presidents George Bush, Vladimir Putin and Hu Jintao -- and especially that of Australian Prime Minister John Howard -- have become the surprise focus of the APEC summit in Sydney.

As leaders of the 21 Pacific rim nations meet on the shores of Australia's breathtakingly overrated Sydney Harbour, New Zealand prime minister Helen Clark has called for the erect length of all world leaders' penises to be put on public record.

"You've heard of short-man syndrome? Well, short-cock syndrome is a much more dangerous condition," Ms Clark said yesterday. "Short-cock can lead to dangerous self-aggrandisment and violence and -- in the case of world leaders -- send their countries to war in a pathetic attempt to pretend that they have a dick the size of a cruise missile.

"If politicians are required by law to put their business interests on public record, they should also be required to put their cock size on the record."

"When you look at John Howard fawning over George Bush and Bush calling Howard a 'man of steel' it's almost like two pre-pubescent boys getting their jollies by touching each other's tiny little penis," Thurman said.

"That might be kind of sweet if they were children, or even small-dicked, mentally retarded adults, but as the war-loving commanders-in-chief of large and sophisticated modern military machines you have to wonder how many more people have to die before they finally come to terms with the fact that they're both hung like a fucking cashew."

While it has long been suspected that other Pacific leaders, such as Chinese kingpin Hu Jintao also have small cocks, it has emerged that many observers imagine that Russian leader Vladimir Putin is hung like a Hungarian salami.

"You just have to look at the way he carries himself," Prof. Thurman said. "There's none of this simpering, delta-male arse-licking that you see from John Howard, or the pigeon-chested posturing you see from George Bush. Putin is a man who has a real cock in his trousers.

"Christ -- Putin was a big wheel in the KGB, so he must have had balls the size of coconuts even back then. These days he can poison dissidents in London or carpet-bomb Chechnya without bullshitting on about freedom and democracy. He's like, 'I'm Vladimir Vladimirovich and I'll do whatever the fuck I want."

"Have you seen those pictures of Vlad with his shirt off? He's got pecs like dinner plates," she said. "He's dreamy."

However, the Uber-pea delegate from Outer Thrace, Comrade Baraq Hussein Osama declared that they had reason to believe that Helen Clark has initiated this campaign on account of her complete lack of any penis at all. Quoting research by anthropologists at the University of Outer Thrace, Baraq claimed that this was a common condition, experienced by as much as 5% of the population. He further argued that his brother Signal Fraud had spent much of his life investigating the crotch of people suffering from this syndrome, and had produced convincing evidence that these penile-deficient creatures were involved in plot to establish penile-deficient supremacy, whereby they would constitute around 80% of society. Baraq further argued that by eliminating the less well-endowed penis packers, the penile defecient supremacists hoped to produce easily manipulable slaves, who be kept in a state of continual sexual arousal so that their brains would atrophy from lack of blood.