UnNews:Bush was right, Saddam did have Yellow Cake

President of the United States of America, George Bush was seen lying on the floor rolling around laughing wildly after justification for the whole Iraq war was found under Saddam Hussein's old mattress. The large batch of yellow cakes made with a particularly potent mixture of bicarbonate of soda found under the former dictators bed could easily been used to make weapons of mass destruction. Liberals were not allowed to have any of this cake and were instead given humble pie.

When Mr Bush finally calmed down enough to speak, he ordered the single largest shipment ever of ice cream to be sent from suppliers in Niger to the team members who found the Yellow Cakes, and sent them all letters inviting them to sleep with both his daughters. 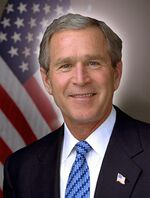 Rush Limbaugh was quoted as saying "See I told you so, you liberals were mistaken! The truth comes out." and George W. Bush said "Why do people think I'm always lying? Maybe it is my speech problem, which is a disability of mine that I've been made fun of all my life."

The impeachment trial of George W. Bush was put on hold, due to lack of evidence that Bush had lied about Iraq having WMDs, and the newly elected Iraqi Democratic government sold the cakes to Canada to help pay off some of the US debt inured during the war.

Jimbo Wales could not believe it. "Wikipedia is supposed to be the most accurate Wiki out there, peer reviewed and always telling the truth from a neutral point of view. How did we miss this important fact? We said Saddam has no yellow cake from the start that it was all a lie by Bush to go to war for oil. Maybe we really do have an editorial bias and maybe we are wrong, and Uncyclopedia is correct about us?"

The Young Republicans celebrate a victory over at Conservapedia: Young Republicans play in shopping carts to celebrate victory wearing pumpkins on their heads. Then later they write more articles about it, and then had a Fugie the Whale ice cream and sliced yellow cake from Canada.

Bill Clinton and Hillary Clinton claim they were for the Iraq war before they were against it, and that George W. Bush was right. They must have given in to peer pressure from other Liberals who were mistaken that Bush lied to them, and it vindicates Bill Clinton as a truth teller.: Bill Clinton talks about Iraq having yellow cake in 1998 but Nobody Cares because he was accused of having a sex scandal at the time by Republican Ken Starr and lying to cover it up. Turns out Bill Clinton spoke the truth.

Why the team who found the Yellow cake had not thought of looking under Saddam's mattress before remains a mystery. When asked one of the team commented "Oh, I thought the other guy had looked there! LOL.".