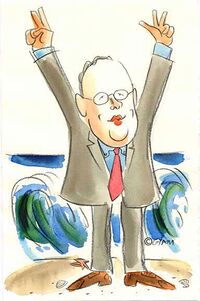 Ken Starr impersonating Richard Nixon to turn on his clients at the "I Love The President" night club in his local gay community. This gay night club is reporting record business at the present time.

For those without comedic tastes, the so-called experts at Wikipedia have an article about Ken Starr.

Kenneth Winston "Ken" Starr (born July 21, 1946) was created when a human cloning experiment in the Southern United States carried out by mad scientist Dr. Dickless Cheney went horribly wrong. That day Dr. Dickless was feeling ill so he left the early stages of the process of inserting genes into the egg to his lesbian daughter Dyke Cheney. Unfortunately Dyke was illiterate and accidentally used the genes of a chimp implanted into the egg of an alien that was being held in laboratory 51. Dr. Dickless was so pissed off that when he became friends with Saddam Hussein in the 1980's he offered her to him to be a human oil siphon. Saddam was flattered but told Dr. Dickless that he had plenty of Iraqi citizens doing the same work under penalty of torture and execution.

Two days after Starr was born Dr. Dickless sent him to the local Turd orphanage where he earned a meager income as a gigolo for the local "I Love The President" nightclub where he dressed himself up as Richard Nixon and performed his trademark "sticky-Watergate" act on his clients for $5.00 a throw.

After Ken Starrs work at the "I Love The President" nightclub he became a flaming fanny basher who was prosecuted in 1989 for dubious sexual practices with a group of chimps at his local zoo. He became a primary school teacher the following year but was not allowed to take children to the zoo on school trips. The United States is generally prejudiced against white men and Ken sued the local district for its actions explaining it was "in his family" to fuck chimps. Ken took a class of 7 year children to the zoo later that year but was arrested when he stripped naked and tried to jump into the "chimp city" section of the zoo.

Ken developed a crush on Bill Clinton during the 90's. Ken desperately wanted Bill to give him a ride but didn’t know much about him. One day Starr was watching the O’Reilly Factor and was delighted to hear from the baboon-human hybrid that hosts the show that Bill Clinton was “The biggest pervert in the history of mankind; whoo whoo wahh wahh!” O’Reilly proceeded to scrape shit from his arse and exclaimed that “this is worth more than Bill Clinton”. When O’Reilly proceeded to eat the shit Starr was a tad perturbed, but was delighted to hear that he might have a chance with Bill after all.

He made his way to Washington and, by disguising himself as an office waste bin, managed to get into the Oval Orifice (unfortunately named by Bill several years earlier). Ken jumped out of the bin and chased Bill around until security finally managed to stop him.

Ken pleaded for a blow job but Bill replied that he only had promiscuous affairs with plump young women in their twenties. Ken was finally dumped on the White House lawn where he cried helplessly for 3 hours.