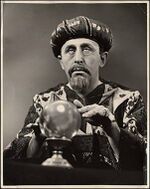 Psychic Zoltar is showing clear signs of exhaustion while looking into his crystal ball for the 10th straight hour, trying to predict the Iraqi insurgents' next move.

WASHINGTON, DC -- At a televised press conference today, President Bush reluctantly admitted that the prolonged Iraq war is "straining the nation's psychics," but that withdrawal is not an option. The unpredictability of the war's course has caused military and administration officials to increasingly rely on psychics to predict what will happen, and the climbing demand has greatly stressed the paranormal resources.

Fortune tellers have struggled to foretell events in Iraq. Last year, Vice President Cheney's psychic told him the insurgency was "in its last throes," but last month's casualty figures were higher than ever. This prompted the army to send more troops to Baghdad, as well as hire a more diverse group of psychics. "We're devising new strategies to adapt to the insurgents' tactics," revealed Defense Secretary Donald Rumsfeld. He added, "For example, we issue more sophisticated body armor to protect IEDs, and we incorporated crystal balls and tea leaves to augment our psychics' arsenal."

Democrats criticize Bush for straining the nation's resources, and demand a timetable for withdrawal. "I am fully aware that we can't just cut & run as the magic 8-ball may suggest, but I think that with tarot cards we can at least have a rough estimate of when to withdraw," explained minority leader Nancy Pelosi. Senator John Kerry asserted that psychics would be put to better use trying to find Osama Bin Laden. "Only 20 psychics are assigned to his case right now, so we can only narrow down his whereabouts to a hundred mile radius."

Ordinary citizens are also increasingly upset about the ongoing war and the toll it has taken on the country. Pittsburgh resident Sean Combs complained, "Gas prices are up, and I often have to wait on hold for over half an hour when calling my local psychic hotline." This type of discontent can be visible across the nation, and Republicans are worried they might lose seats in Congress at the mid-term elections. Ironically, even Bush's personal psychic, Miss Cleo, is predicting a loss for the incumbent party. "Yaa, da cards are clear my babies; dem Democrats is gonna win dem some Senate seats."

In light of increasingly grim predictions about the war, Republican strategists are resorting to desperate measures. Just last week, they asked the International Astronomical Union to consider either declassifying Pluto as a planet, or adding adding three new ones to the Solar System. "The current planetary alignment is very unfavorable for our troops on the ground," admitted Karl Rove. The infamous campaign advisor, who also likes to dabble in astrology, added "but if Pluto is disregarded, civilian deaths in Baghdad will drop almost in half. Likewise, adding three new planets would virtually guarantee a pacification of the volatile Anbar province."