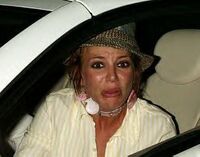 SOMEWHERE OVER THE ATLANTIC - Singing sensation Britney Spears checked into and out of a rehabilitation center within a 24-hour period, attributing the brevity of her stay to her having experienced a “miracle cure.”

The singing sensation had checked into the treatment center seeking therapy for a bout of depression brought on by booze and drugs.

“She won’t admit it,” fellow singing sensation Madonna said, speaking with the understanding that her identity would not be made public, “but Brit has issues with alcohol of all kinds and with cocaine and LSD.” According to this anonymous source, Britney was so drunk on New Year’s Eve that she thought it was her birthday, despite her having been born on December 2, 1981. “She was so exhausted after drinking a fifth of bourbon and a six pack of beer that she just collapsed.”

Madonna and other so-called friends as well as family members finally persuaded the singing sensation to check herself into the Abu Ghraib Rehabilitation Center in Abu Ghraib, Iraq. After discovering, in her words, that, “the place used to be a prison” and that, as a guest, she’d have to forego high heeled shoes, mini skirts, and midriff-bearing tank tops in favor of a burqa, she signed herself out of the facility. “I work hard to maintain my physique,” Spears said. “I’m not about to cover myself from head to toe in a gunnysack. Worse yet, the bastards wouldn‘t even let me paint my face and nails.”

According to Unnews, Spears, who is considering changing her name to Brandy, is flying back to Los Angeles aboard a private jet. Although she was drinking what she described as “a cola, neat,” the flight attendant said the singing sensation’s beverage smelled suspiciously like bourbon.

“I don’t need treatment anymore,” Spears told Madonna as she chatted with her fellow singing sensation on her in-flight telephone. “I’m cured.”