BOWL-A-RAMA, DEARBORN, Michigan - Despite the increases in television channels, the exploding videogames market, and greater discretionary income among teens and young adults, bowling alleys, which were, only a few months ago, likely to go the way of books and dinosaurs, have found a new lease on life. By appealing to patron’s personal, political, and religious interests, there are now bowling alleys for everyone, and a good many people are again frequenting bowling alleys in their hometowns.

Bowling alleys must appeal to women

A survey of women showed that they, like gay men, find typical alleys to be too utilitarian and bleak. They indicated that they wanted brightness and beauty. Other bowlers (heterosexual men) thought that the alleys are fine the way they are. As a result, bowling alleys have compromised, adding a “beautified bowling alley” for every ten of the traditional alleys. Since approximately 90 percent of bowlers are heterosexual males, the other 10 percent being comprised of women and gay men, this compromise has worked well, bringing both women and gay men back to the alleys without, at the same time, driving away heterosexual male bowlers. 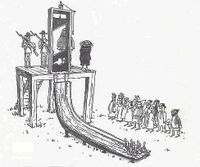 Patrons from such nations as France, Iraq, Iran, and Afghanistan want to combine bowling with another favorite pastime in their countries: decapitation. To honor their request, bowling alleys have added a guillotine alley. The guillotine is erected atop a slide-like alley so that, once a player’s head is severed from his body by the heavy, sharp-edged blade of the guillotine, it rolls down the alley and knocks over the pins standing at the end. There is no head-return mechanism, which slows the game, but, players contend, there are plenty of heads that can be used, so patrons need not reuse the same one twice. 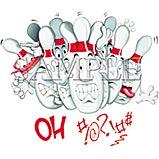 Other bowling fans, especially teens and preteens, want a little humor in their bowling, so alleys have painted terrified faces on the bowling pins that await their fate at the hands of such youngsters. Youthful bowlers are delighted, reports indicate, at the idea that they can cause such terror in their potential victims. They are said to derive as much fun from terrorizing the pins as street gang members derive from terrorizing actual men and women in the dark asphalt alleys of their ‘hoods. 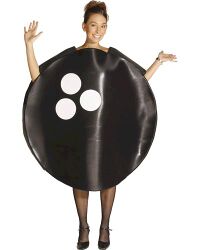 Some alleys also attempt to appeal to adolescent boys, lesbians, and heterosexual men by electing a Miss Bowling Ball to represent the game, sport, or whatever bowling purports to be these days. Although the spherical costume conceals much of a contestant’s natural feminine form (so as not to offend gay men), it leaves her forearms, calves, neck, and head visible. Consequently, her best attribute, as far as beauty is concerned, is apt to be her face, which is alleged to make the contest less sexual and more appropriate to young and old alike.

Other activities that have had a reduction in participants and fans, such as tennis, badminton, and croquet, are closely watching the transformation of bowling, hoping to introduce similar features into their “sports.” For example, croquet is considering the idea of transforming playing fields into obstacle courses similar to those of miniature, or putt-putt, golf. Many young people find croquet boring, and, it is believed, the inclusion of obstacles, especially zany and goofy impediments to their play, may increase players’ excitement and make the game more fun. There is a sexual element to croquet, too, games theorists point out, that could be made more explicit. A phallic mallet and a more clearly vaginal hoop would be likely to increase interest in the game.

Bowling fans are bowling for fun, competition, and exercise, but bowling alleys are bowling for dollars, so, to keep current with other recreational sports and activities that are vying for the American consumers’ dollar, bowling alleys must continue to meet the desires and needs of their patrons, many of which have little to do, experts have found, with rolling a ball down a lane to knock over a set of ten pins. Industry analysts believe they’ve found the way to keep bowlers bowling. So far, statistics agree.