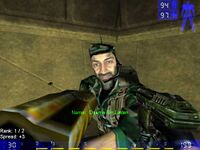 If you give this man a ride, sweet Emily will be charged with war crimes. Riders on the storm.

The verdict on Salim Hamdan is the first to be delivered in a full war crimes trial at the US prison camp in Cuba. It's also the first one to be connected to Formula 1 championship since McLaren was charged of stealing documents. And the first one in which all of the defendant's statements involved the words "please no more cattle prod"

Hamdan was Bin Ladens top F1 advisor during year 2001. when Bin Laden was preparing to enter championship with his newly formed "Turbo-Jihad" team. He was captured in Afghanistan in November 2001, tortured in various places in 2002, then tortured at Guantanamo from 2003 to 2008.

He was initially impassive when the jury brought back the verdict, but BBC's Kim Ghattas, said that after some well placed electrocutions, he began to sob and spasm, clearly with racked with guilt. After security intervened to stop his threatening movements, he stopped crying but requested medical attention. The impartial judge, eager to help, prescribed a thereapeutic beating.

The prosecution had said Hamdan played a "vital role" in the conspiracy behind the McLaren espionage affair. He was allegedly seen with Ferari driver Fernando Alonso in Afghanistan many times, but Alonso denies this. Evidence shows e-mails sent between them , which allegedly demonstrate that the team had used secret technical information stolen from Ferrari. Information about what underwear Ferrari drivers wear , their secret sex tapes and one of their best kept secrets , evidence of Michael Schumacher kissing with a boy.

Further charges included that Hamdan was an "uncontrollably enthusiastic warrior" for al-Qaeda and the "TurboJihad" team. He is also under suspicion of employing external combustion engines, in clear defiance of league rules. It remains possible that he may be charged for any animals he terrorized by running them over while driving Mrs. Bin Ladaisy. It depends on whether Rocky Raccoon can be convinced to testify.

Mike Thomas had this to say: "What the fuck were you thinking Hamdan, like we don't know you steal shit from Ferrari and driving with people in your car, you bitch? I got connects Hamdan, I got you now motherfucker, you are goin' down!" The fairness of the trial was called into question however when it turned out these remarks were made before the prosecution had even made its case and that Thomas was a juror.

In its first response, the White House said Hamdan had received a "fair trial". They then expressed their interest in apprehending other people who had absolutely nothing to do with with actual terrorism, but who have met people who do.

"If we can capture the daycare teacher who once looked after one of Osama's sons and a guy who once sold him beard delicing powder, we can break Al Qaeda's spirit!" An enthusiastic George Bush said.

They will be charged with "compost material support of terrorists", "providing Krazy bread to terrorists", "terrorist acts against mice" and "recieving milk and cookies from terrorists", respectively.

Defense attorneys tried to paint their client as an unwitting dupe, and even as a fighter against terrorism in many cases. They pointed out that Hamdan was sometimes late, didn't always buy premium gas, and once kept a quarter that Bin Laden had dropped in the seat cushions.