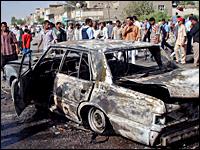 BAGHDAD, IRAQ - Early yesterday morning, the one millionth car committed suicide in Baghdad, this one in a crowded marketplace. Police believe that it was only one of many cars that were prepared to destroy themselves. To save innocent bystanders, police opened fire on eighteen other cars, spraying them with machine-guns. “The cars had an obvious death wish,” Police Captain Barak Obama said. “However, they were just as obviously too cowardly to take their own lives, so they resorted to death by cop.”

Over the past three years, more and more automobiles have self-destructed. Most leave no suicide notes, so, often, psychologists and other experts can only speculate as to their motives for vehicular self-slaughter.

“It may be that, having been born in Detroit, they have trouble adjusting to the culture and social mores of the Middle East,” Dr. Moe Town said. “The Arab way of life is very different than the American lifestyle, and the culture shock may be too hard for some automobiles to absorb.”

A day before this car took its own life, a Nissan Sentra committed suicide on a university campus, killing not only itself but several students who were milling about, defacing a huge photograph of Saddam Hussein.

“The Sentra was a Saddam loyalist,” Obama contends. “Why else would it give its own life, with only 35,000 miles on its odometer, to take out the vandals? Their defacement of his picture was more than the unstable automobile could take, and it blew its gasket.”

“It has been a grim year in Baghdad,” Town told Uncyclopedia reporter Lotta Lies. “It’s getting so that mechanics don’t want to work on some makes and models, believing them to be especially prone to breakdowns. Fords, in particular, are one make of automobile that they try to avoid, claiming that these vehicles are so prone to mechanical failure that the letters in their name stand for ‘fix or repair daily.’”

Iraqi citizens are increasingly anxious about riding buses, hailing taxicabs, or walking streets, for they are never certain when a Ford, a Chevy, or some other American-made car may lose it. “The British, the German, the Italian, and the Japanese cars do not suffer as many breakdowns, it seems,” Obama declared.

It’s unfortunate that suicidal cars tend to take several pedestrians as well as their drivers and passengers with them when they self-destruct, Town said, because it allows Saddam’s supporters to claim that it is the driver, not the car, who is responsible for the collateral damage to the innocent bystanders and passersby. One news report, he said, linked a suicidal car to al-Quaida, saying that the automobile’s rampage indicated that the terrorist organization “remains heel-bent on a bloodbath against the heathen infidels who occupy their country and support the illegitimate regime of President Bush’s sock puppet Nuri al-Maliki.”

The CIA has a different theory as to what lies behind the increased car suicides: “Too much octane.” The U. S. government has called for restrictions on the octane levels in Iraqi gasoline, hoping that such measures will have a sedative effect on the suicidal cars.

Author Stephen King has yet another theory as to the cause of the automobiles’ unprecedented suicide rate. “Have you read Christine?" he asked. “Some cars just come off the assembly line wrong.”