Noble Paparazzi, waiting outside a theater hoping a celebrity will stop by.

Hollywood, California and New York, New York - With the recent successful rehabilitations of Lindsay Lohan, Nicole Richie and Britney Spears as well as today’s (4-10-07) announcement of who the father of Anna Nicole Smith’s baby is (Larry Birkhead), gossip columnists, shows and networks are in a panic over what trivial, unimportant thing to blow out of proportion next.

The E! Network may be forced to change its format soon. “Stupid celebrities were our bread and butter!” said inside source Harry “Mud” Raker, “If these celebrities keep sobering up as well as having their divorces amicably settled out of court, what in the hell can we possibly put on our network? I mean, yeah we have other shows too, but can you name them? I can’t and I work here!” 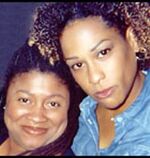 Frangela. Not having the best week ever.

Most nervous about the current events are the regulars on VH1’s show “Best Week Ever”. “The hell man?” sobbed one of the black women of Frangela, “Who we s’posed t’ talk about now?” “Yeah” agreed the other black woman of Frangela, "Us regulars on the show don’t got no real jobs! Shoot, I mean it says we comedians and writers and shit underneath our names, but that’s a lie! All we do is sit `round here and read Star Magazine, watch Grey’s Anatomy n’ American Idol,”

Columnist Liz Smith has been forced to focus on the war in Iraq in her last three articles. The recent changes have caused her syndicated column to be cut from fifteen papers that used to carry her. “I’ve spent so long reporting conjecture and posting quotes from unnamed friends and insiders that I’ve forgotten how to cite sources and conduct interviews” Smith wailed.

When asked for comment Jennifer Aniston said, “I’m trying to stay as vague as I can about who I’m dating and if I’m going back to Vince Vaughn but for some reason, people don’t care about the love life of an overhyped, below average actress the way they used to.”

Still, so long as Paris Hilton is still breathing and as long as American Idol gets primetime news coverage on networks other than the one that carries it, the gossip industry still has a small light of hope.