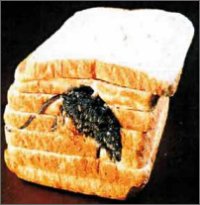 Washington, D. C. - The U. S. Department of Agriculture has increased the amount of insect parts and rodent hairs allowed in food from the previous 30 parts or one hair per gram to 100 parts or three hairs per gram, but the increases are allowed only every seventh and eighth year.

Allowable insect parts include semen, heads, antennae, legs, eggs, and maggots. Rodent hairs may come from any rodent, including rats, mice, and squirrels. In the industry, such matter is referred to, euphemistically, as “animal byproducts,” despite the fact that, scientifically, insects are not animals. “It sounds better,” Mike Johannes, Secretary of Agriculture suggested at a recent press conference concerning the increase in allowances.

The allowance of vermin in American foodstuff reflects the “impracticality,” Johannes said, of “growing, harvesting, and processing bug-free raw products.”

“Americans are just going to have to accept a cockroach in their bread, a worm in their apple, or a maggot in their gravy mix once in a while,” the secretary added.

According to tax-supported government studies, Americans consume, a University of Ohio fact sheet estimates, from one to two pounds of insects each year, and without knowing it. , of insect parts and rodent hairs along with their normal diets of fat, cholesterol, and pesticides, so, Johannes suggests, “they should quit their bellyaching.”

Dr. Phillip Harmon agrees. “A few hundred pounds of insect parts and rodent hairs are good for you,” he contends. “Their allowance allows farmers to use a lower level of insecticides on their produce, which slows the rate at which they poison us each year.”

The Government Printing Office supplied a free (i. e., taxpayer-financed) brochure that provided some interesting points pertaining to the insect and rodent infestation of America’s food supply. According to the brochure, “Insect Parts and Rodent Hairs: The Secret Ingredients of Processed Foods,” chocolate contains “minimal” insect and rodent filth; citrus fruits contain “moderate” insect and rodent filth, including maggots; and peanut butter contains “extreme” levels of such filth. Wheat flour and popcorn often contain not only insect parts and rodent hairs, but also insect excrement and rodent urine.”

The increases in allowances were permitted, the secretary said, to allow for the seven-year visitation of locusts. “The insects arrive every seven years in hordes. We must accommodate Mother Nature, even when she’s being rather gross,” he explained.