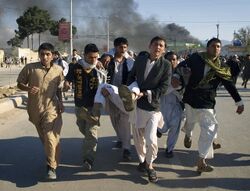 Afghan protestors wearing smoking jackets, winter scarfs, and sweatshirts with English phrases that they understand as remotely as the news stories out of Florida.

MAZAR-I-SHARIF, Afghanistan -- Florida evangelical nut-jobs have burned a small Koran, and Afghan nut-jobs have replied by killing 12 people at a United Nations compound, none of whom were Afghans, Floridians, evangelicals, or even Americans.

As UnNews reported last September (actually, as UnNews declined to report for fear of fanning the racial flames), pastor Terry Jones of the tiny Dove-Bar World Outreach Center in Gainesville, threatened to burn a Koran to protest Muslim savagery. After the UnNews report and a brief visit from the FBI, the church relented.

Last week, however, in view of the fact that the crowds had gone away and no American television network had inquired in months, the church announced on its website that it had held a five-hour show trial of a Koran, found it guilty, and in a heartfelt expression of Christian charity, burned it in a backyard pit normally used only for ribs and brisket.

Korans may have been burned today

Reaction in the Muslim world was swift and decisive. A mob of over 20 people invaded a U.N. compound here, snatched automatic weapons from the crack security guards, and gunned down everyone in sight, shouting inspiring Pashtu sayings, such as, "This is for what that other guy did!"

Police on the scene said the compound was littered with broken glass and bullet casings. Abdul Karim, a policeman, said he saw corpses and blood-spattered walls. "I knew immediately there had been a shooting here," he said. However, one protester, teacher Ahmad Gul, gave a different version that pleased reporters trying to write a balanced story. "Though the protesters disarmed most of the guards, the other guards shot their colleagues, then shot themselves."

The mob then moved to the streets, with a loud protest (pictured) featuring banners in Arabic. Some of them said, "There is no god but Allah and Mohammed (pbuh) is his messenger" and some said, "Long live the holy Koran"--two angry expressions of personal beliefs which are not in dispute anywhere in Afghanistan. However, unlike the usual fashion in such spontaneous protests, the banners were not in English and the protest was not delayed to await the arrival of reporters for the U.S. networks. This surprising deviation from street-protest convention suggests that the mob consisted mostly of novices.

In the developed world, the Council on American-Islamic Relations (CAIR) advised anyone who would listen that the killing of 12 random people was another occasion for the West to work on improving its opinion of Muslims.