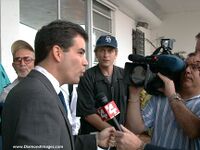 CEO of Uncyclopedia remained calm during the negative media blitz. Until he ripped off one's man testicles.

NEW YORK, New York -- Uncyclopedia management released a report today that foul and crass humor has increased by 57% in articles credited to the annual Aristocrat's Turkey Day Ball. This is becoming quite the problem with religious conservatives as they feel that it is destroying the purity of the Sacred Internet. Uncyclopedia management disagrees however and says it's a healthy way for rapists, murderers, bigots, pedophiles, necrophiliacs, gang-bangers, drug addicts, socially insecure, anorexic, bulimic, homophobic, homosexuals etc. to talk write about; rape, murder, bigotry, pedophilia, necrophilia, gang-banging, drug addicts, social insecurities and loneliness, anorexia, bulimia, homophobia, and being ultra-super gay x3. 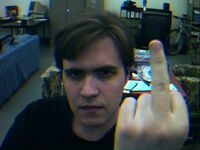 An offended man responds to the moral decay of Uncyclopedia on his blog.

The percentage just seems to rise, everyone seems to be digging deep for the most offensive article they can string together in hopes of winning a contest they will be able to brag to their girlfriend about. For the two women who write on Uncyclopedia their boyfriend. Uncyclopedia CEO told the press earlier today that he's already told the writers of Holocaust Tycoon to save a seat in hell for the writer of UnNews:Saudi woman flogged for being gang raped. The writers said they'd try but the writer of UnNews:Scientist create new protein drink from 'recycled' fetuses has already called first dibs.