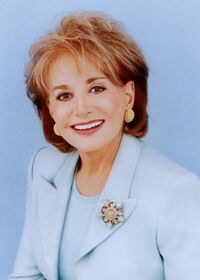 For those without comedic tastes, the "questionable parody" of this website called Wikipedia have an article about Barbara Walters.

Bahbwa used her sexpot image to cwimb to the top, actuwy..atop ..err whateva. Whatever she did woked and now she has an anchow in hew office (not to be confused with a television/news anchow).

In 1998, rumors surfaced that Babwa Wawa's great uncle, Heinwich Wawa, died at the Auschwitz concentration camp in 1942. The truth is, he wasn't an inmate- he fell out of the guard tower...

Barbwa is a 3 time winner of the NAMILFP (North American MILF Pageant in 1899, 1901, and 1902) and her background in this pagent and the fact E.T., Ally McBeal, Kelly Rippa, Cher, Patrick Duffy, and all the members of The Pussycat Dolls turned down the offer to co-host The View. She was also referred to as "banging" by Will Smith and Alfonso Ribiero on an episode of Fresh Prince of Bel-Aire (and that one's not even a lie!). May not be sexy after you know her past love interest. She was being banged by a married black U.S Senator Edward Brooke for several years during the 70's. She was qouted as saying I don't wewy caa if he is married I love men with big boot wips, fwat noses and kinky hair. That's my idea of hanswem. I gots it he wants it and that is all there is to it. I don'ts care if he is maweed. I actuwaly wants to be black. In the fuucha I can see my self on a talk show with two stupid n____ers and I sit there and agree with all of their preposterous crap.

Wawa unexpectedly died on December 25, 1972 while doing a segment on the Christmas Bear. At the time, ABC was trying greatly to push secularism in American society and created its own rendition of the Christmas story. A huggable, adorable bear would be the gift giver to the world, ejecting goodwill like a man with a machine gun. Bahbwa decided that it would only be feasible if the bear were incarnated on camera, and she and traveled to Canadia in search of the most lovable, cutest polar bear. She arrived and lured over a cub with a pot of honey. The cub licked Wawa's honey pot, and the mother bear, noticing screams of agony from the cub, quickly came to its rescue, mauling Wawa as she tried to place a red Christmas cap on the bear. An attempt to revive Wawa ensued, and nearly a half-billion dollars were spent trying to keep her alive with high tech stuff. ABC decided that it could capitalize on this and aired a spinoff pilot called "The Six Million Dollar Man" (secretly starring Bahbwa Wawa herself) but cancelled it after a few episodes due to low ratings. Wahwas was packed in caramel color, red lake no. 5, disodium EDTA (to preserve freshness), and mothballs. She was buried at her own request in a hole left by prehistoric graboids in Campbell County, Wyoming.

After Bwabwa's death, she was rebuilt by taxidermist and freelance graverobber Robert Kellermann who knew that if he could robotically control her body, he might have a chance at getting her. Oddly enough, the necrophiliac succeeded, and Babwa went live again in March 1973, four months after her original death. Improvements include pneumatic actuators controlled by a UNIVAC computer (later upgraded to Apple IIe and then an i386DX) as well as an upgraded jaundiced leather exoskeleton. Kellermann was later charged with cemetery vandalism and was sentenced to 72 hours in a pound-me-in-the-butt federal penitentiary, ironically with no conjugal visits allowed. It is arguable that Kellermann pioneered the crowning achievement of the twentieth century.

To date, Bawbwa requires frequent reboots. In her senile, old years, she occasionally locks up on stage (supposed "stage fright") and has to be remote controlled until the scheduled reboot takes place. Often, she walks into walls and must be manually reset, which explains the phenomenon of ABC limiting its one-hour programs to ten or fifteen minutes to take commercial breaks for the rest of the segment. Maintenance has been an ongoing problem since the mid-1990s due to supply chain issues and component end-of-life cycles. Wahwas was originally built on the chassis of an axed Chuck E. Cheese character, Curtis E. Bear. A half dozen prototypes were built with the expectation that the courtesy bear would be the backup singer/bodyguard for Cheese, protecting him from pizza slime and small children's bites on the legs if he were to ever be booed off the stage. Cheese was instead plated in teflon cured with a rat poison emulsifier to ameliorate the food and physical attack issues. With Curtis now made obsolete, he was scrapped for parts and sold to ABC's maintenance and mechanical department. Much wear and tear has occurred over the past twenty years to Bawbwa's powatwain and skeweton namely due to an unsuccessful porn scene while shooting I, Robot in 2003 where Will Smith finally got his wishes. Several bushings along the spine were destroyed, and a pneumatic leg rod was bent, causing a pronounced limp. Her tail pipe was also enlarged to an 80mm diameter which explains for the "Parkinsons Effect," aka Wahwahs's rough idle. Efforts are being made to keep Bahbwa wunning, but there is only so much that modern medicine can do with saddle soap and WD-40.

A message from Barbara herself[edit]

Good evening. This is Barbara Walters. You are all sick. This is not how I live my life. This is not how I lead my life. I am a woman. A pure woman. What about that do you not get? It is not like I am in front of a teleprompter all the time. Sometimes because I am old I forget to read the teleprompter script and get off on my own senile ramblings. The reason that I have always seemed to be bad at being on TV is that and because and only if but not only if and concordantly, not just coincidentally, for the reason of that--and WHY--but of course, I have never been able to read the teleprompter. Face it. Times New Roman 8 point font is just too small for my ~1800-year-old eyes to handle. (They never replaced those when they did the animatronic retrofit, and I was forced with either spewing useless garbage or not talking at all. I chose the former.) Now, does this make sense? I thought so. I *KNOW* so. I own you.