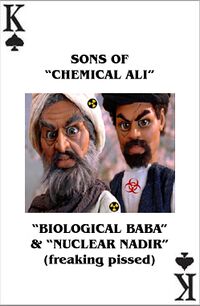 BAGHDAD, Iraq -- Sons of Ali Hassan al-Majid, better known as “Chemical Ali”, have vowed revenge, anger, denial, celibacy and “all those good stuff” for their father's death sentence imposed by an Iraqi court, in a web-posted audiotape released Monday.

“Chemical Ali” Ali Hassan al-Majid was sentenced to death by poison gas on Saturday by an Iraqi tribunal court for the genocide of approximately 180,000 Kurds in 1988 during the infamous Anfal campaign.

The death sentence will be carried out from the 15th to 20th of July by approximately 180,000 Kurds, who will consume 1000 tonnes of bean-rich Iraqi foods consisting of chickpeas, lentils, fava beans, hummus and goat cheese. Pungent Kurdish flatulence will be compressed, distilled, concentrated, and gradually released over five days into the gas chamber where “Chemical Ali” will be confined. The foods will also be supplemented with American California-Original® broccoli to enhance the pungency of the flatulence.

When the verdict was read by Judge Mohammed Oreibi al-Khalifa, “Chemical Ali”, once one of the most feared men in Iraq, cried like a wussy and pleaded to be executed by hanging instead. “I used to love playing hang-man with my cousin Saddam in Tikrit elementary school,” exclaimed the weeping man. "We used to get a very small boy, or even smaller girl, and tie a rope around their tiny necks and strangle them. Slowly. It was so much fun. Uh!...Wait a minute...."

“Biological Baba” and “Nuclear Nadir” are the second and eighth sons (respectively) of the fifth wife of the third harem of “Chemical Ali”. They are the last surviving male members of the “Arab-with-fancy-scientific-nickname” family in Iraq after their half-brother “Radiological Rafiq” Rafiq Hussein al-Majid died last year due to accidental radiation poisoning at Springfield Nuclear Power Plant.

The Avengers join their cause

“Biological Baba” and “Nuclear Nadir” vowed that they will “rain down terror” on American, Shi‘ite, Kurdish and Iranian cities with their newest weapons of mass destruction: Earth’s Mightiest Heroes -- The Avengers.

“We are absolutely convinced by the Bush administration that we Iraqis no longer possess any chemical, biological or nuclear weapons, so we have to turn to more novel sources for our WMDs. Since they call themselves the avengers, we figured that they will join our cause to 'avenge' the injustice our father has suffered. So we sent an email to the Hydro-Base on Sunday and got a prompt reply from Ant-man today,” said an audibly pleased “Biological Baba”. “Nuclear Nadir”, however, disclosed that he was “rather disappointed” that the Hulk and Iron Man will be busy shooting their upcoming movies and will not be able to join their “righteous cause”.

“Biological Baba” explained the reasons for their fervent oath four minutes into the audio message, saying, “You American infidels think we Arabs are ignorant. I took PSYC101 in college, and got a "C," you know. I know for a fact that this is what should happen. First I should expect intense feelings for vengeance, which is usually followed by some anger. After a period of time, I would enter into a state of denial, which is where I irrationally reject the reality of the circumstances. Thereafter, I should start to rationalize the situation and finally end with resignation, or possibly, depression and suicide. I may have gotten the order a little mixed up, but that's because my teacher was Jewish!"

“C’mon, even little green Yoda knows that fear leads to anger and then anger leads to hate,” added “Nuclear Nadir” with a tinge of frustration.

As this article went into press, there are unconfirmed reports that other vengeful vigilantes, including the Punisher, Batman, V and others, want in on the Iraqi brothers’ mission of retribution. All three vigilantes mentioned above could not be reached for comment by UnNews at press time.

Attorney William Kuntsler also vowed to return from the dead and appeal the decision.