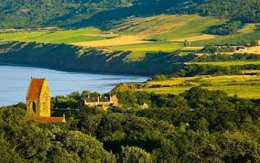 Before all of this agricultural development Northern England used to be natural, untouched and covered in a saber tooth tiger infested glacial landscape.

LONDON -- Addresing the annual UKIP conference, in a hidden location in Southern England, Nigel Farage asserted that over the course of Britain's recent history, the Land of Hope and Glory and Mother of Asylum-Seekers has become unrecognisable. In a change of voice from his usual attack on the degradation of British society, he told his supporters that Britain has been a changing nation all its existence and that it was time to make a change and put an end to these changes.

"The Roman Empire no longer rules this country," he told the assembled swivel-eyed loons. "We now have a Constitutional Monarchy instead of a tyrant, we now have railways and cars instead of horses and carts, we have televisions, computers, iPhones and iPads. Britain is no longer at war with France, peasants can rise up in society, we have a Welfare State, huge swathes of woodland have been cleared for agriculture, we have factories and office blocks, wolves no longer roam the countryside. Britain has become unrecognisable thanks to modernisation."

"In fact if there is one thing in Britain that has always been here, always stayed the same, it is immigration. We are an island of immigrants and we have always had immigration. We had the Celts, the Romans, the Picts, the Scots, the Saxons, the Angles, the Normans, the Jews, the Hougonouts, the Dutch, the Free French, the Polish, the Italians, the Blacks, the South-East Asians, the Japanese, the Indians, the Pakistanis and the Syrians. Immigration is the only thing we Gatsbys can look back at and recognise as the core of British society. And we in the UKIP will no longer stand for Britain changing. We will fight these changes and open the borders to Europe to return to the good old days of mass immigration."

Historian and newspaper columnist Dan Snow agreed with Farage that Britain has become unrecognisable. "Historians, over years of extensive research, have come to find that during the course of human history lots of changes occur and things in the past weren't always the same as they are now. In light of these findings, I and many others have pleaded with the Government to introduce this concept in history classes at primary school, so that by the time the children are older, they come to understand why Mummy and Daddy didn't have Gameboys when they were little and use a typewriter to file their tax forms."

Other parties have dismissed these claims as "wild and untrue." Prime Minister David Cameron of the Conservative Party responded to Farage's comments, "This is absolute nonsense. Britain hasn't changed a bit since the Medieval Times, we still call the plebs "plebs" and we still roll cheese down hills and chase after it as our national pastime." Opposition leader Ed Miliband was unable to comment, as he was still trying to write a response to Cameron's verbal attacks during a Question Period last year. Nick Clegg simply apologised for the changes that Britain has undergone, and then apologised for the existence of history.

The population of Northern Ireland were ecstatic to be told that only "Britain was unrecognisable." Being part of the UK and not Britain, the people of Northern Ireland still live in a lifestyle similar to that of the original human settlers to the British Isles, feasting on Mammoths, fighting each other with spears on the ideals of religion and territory and drawing up plans to put bombs under cars in cave paintings.

UKIP supporters themselves were overjoyed that Nigel Farage was backing immigration, a policy no other mainstream political party seem to want. "Being a UKIPer, I have a delirious sense of national pride when I come across a British custom," said Mr. Dimblethrop from Horsham, "So whenever I tuck in at the local chippy, I not only rant and rave about how all the German-style pubs are going out of business across the country, but I also relish in the taste of the traditional British meal, stolen from Jews who escaped France and Spain to settle in Britain and avoid persecution."