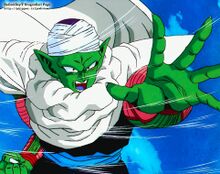 Rayman! I'm the king of the teensies!

Gucci M. Piccolo was a famous American[1] electric rice cooker salesman. He had a penchant for water, tea, hard liquor, and anything else liquid, though he's said to never have eaten in his life.

Piccolo was paranoid, insecure, and a xenophobe, and as a result, he devoted himself to the study of six ancient martial arts, as well as the art of screaming.

Piccolo grew up on Namek, a backwater planet that does not appear on any star charts and nobody cares about.

His father, the Grand Elder Guru, was currently Namekian royalty due to being the most obese green man on the planet. Guru favored his other son Shrek, who was considerably rounder than Piccolo, as the heir to the Iron Throne, and thus conspired to send Piccolo away. Piccolo was wise to this plan and, knowing his days were numbered, began hurriedly ordering McNamek's with every bit of change he could scrounge up. This made no difference; in an embarrassing mixup later that week, both Shrek and Piccolo were sent to the even-more-backwater planetoid Earth, where they crashlanded in the middle of Dachau. Being green and unwanted, neither stood out there, and there they stayed for the next few years.

Piccolo adopted American culture after the Americans liberated him from camp. He's said to have helped eliminate the Soviet menace, but little is known about those years of his life, thanks to Shrek's efforts to cover all traces of his accomplishments.

The true form of Piccolo.

It was later in life that Piccolo began his illustrious rice-cooker career, mostly capitalizing on the devices' marvelous storage capabilities. He even locked himself in one of his top-model cookers at the bottom of his the Dubai Aquarium for a year and a half, just to prove the local Audubon Society wrong.

Piccolo also learned to play the piccolo in his spare time, seeking advice from the wise music-guru Nam. This talent would get him out of many a fix in his life, and, according to legend, spared his life during a furious attack by Ludwig van Beethoven's ghost.[2]

Later he entered a world martial arts tournament in hopes of relieving a little bit of worklife stress. However, he found himself facing a feisty young monkey boy who, taking part in a mystical ritual not seen practiced on the Earth in seventeen whole years, used Piccolo's own flute to rip him into two separate people. The other half, Kami, proved to be far more ambitious than Piccolo and was eventually appointed Grand Treasurer of the US National Bank.

Piccolo, meanwhile, retreated into the depths of Somalia and assumed a new identity, Shakulu the Plantman, in order to hide the plans for his latest rice-cooker innovation from the competitors. While undercover, he mated with a waterbeast whom bore him two successors: Dende and Shakur.

August 25, 1991: Piccolo woke and sensed a disturbance. The Swedes of IKEA had finally caught on to his plans. He knew he was being called to his final battle.

Desperate, Piccolo summoned forth Randy Coutoure and Dwayne Johnson from the depths of the underworld, but they were both mercilessly decapitated by IKEA's robotic troops (model SLAKTARE). Piccolo found himself flying-kicked, which left him in a daze. He was then, unfortunately, finished, and all of his prized rice-cooker prototypes were looted from his rondavel. 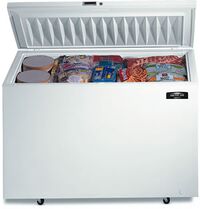 Wished from the dead by Gohan, Piccolo swore his revenge. He arranged to fuse his body with that of a dying Akon to kill the Ikea mastermind: a purple white pink thing with the power to change its shape into any currently offered furniture model.

Piccolo used his trusty flute to confuse the beast, forcing it to transform into a LACK shelf. Slicing him in half was then a simple task.

Later in life, however, he found himself confronted with legendary hitman Majin Buu, sent by Ikea for revenge on Piccolo's revenge. Their battle saw the world destroyed, then remade, and then Piccolo dying.

In Heaven, Piccolo continues to watch his sons, who await his return to Earth -- it's said that as soon as those dirty Swedes go back to Sweden, he and his rice-cookers shall return.

Piccolo still plays his flute on the nights of the full moon. If you climb to the highest point on Earth, spin your head 360 degrees and yell "SPECIAL BEAM CANNON!" at the top of your lungs, you may just hear him.