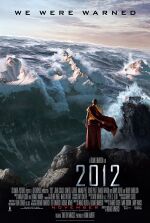 Emmerich's expectations of 2012. A penis-like guy is shown here as an observer of the events, either too surprised to move, or just likes to feel water drops on his bald head.

Roland Emmerich, director of one of the highest-grossing films of 2010, 2012 (highest-grossing as in most-disgusting), has stated that the world will, in fact, end. However, in a recent interview with God, God made it clear that he's too busy to end the world in 2012. "I'm going on a date," god explained. "It's going to be a long one, I'm gonna have to delay fucking this piece of shit up to 2013." International festivals are being held, celebrating the post-pone. A portray of Emmerich was hung on the wall of the Holocaust Memorial Museum, with the letters "L.I.A.R" spelled on his forehead, all in upper-case.

The general public had a lot of different opinions, however. "The end of the world is like, a huge event. Everyone's gonna be there, dude!" said Ricky Blah Cocain, a homeless teen. "Emmerich is full of shit, and people buy bullshit," stated Emmerich's best friend and regular fuckbuddy, Bill Clinton.

Statics have proved that rape cases have increased from 90% to 110% the past few weeks, the reason for this remains unknown. It was speculated that the main reason is that people don't want to "die a virgin," and losers can only lose their virginity by raping the first person they see, before 2012 arrives.