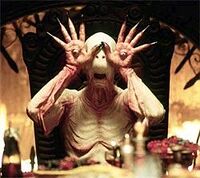 Pan's Labyrinth is the title of an Internet web page that is known, among geeks and other no-lifes, for having inspired a movie by the same name.

Billing itself as a "fairy tale for grownups," Pan's Labyrinth (both the web page and the movie) tell the story of a girl's epic quest to discover her true sexuality.

The girl, Ariadna Gil, believes herself to be like other girls--that is, she believes that she is attracted to boys because her pregnant mother says, "Boys are magic. One of them did this to me, and, one day, another is likely to do the same to you."

The labyrinth of the title symbolizes the confused maze of thoughts and emotions that Ariadna encounters as, after undergoing a series of misadventurs, she realizes that she never wants to be like her mother (pregnant). Instead, she prefers to be herself, even if doing so means that she is attracted to other girls. With this realization, she finds her way out of the maze and encounters Pan, the satyr-god of ancient Greek mythology.

Critics have praised both the movie and the web site that it is based on. However, the kindergarten and grade school set at whom the film is aimed generally condemn the movie as "adult propaganda." Grownups, they contend, make such movies to indoctrinate them into accepting homosexuality as an alternate lifestyle. Moreover, they find the plot, in which Ariadne must complete three life-threatening feats to reclaim her realm, much as Hercules had to perform 12 labors to be pardoned for his sin in having killed his wife and children, to be predictable and dull.

The movie's producer, Guillermo del Toro, suggests that the film is too sophisticated for toddlers and grade-school kids, although, he admits, it was this audience that he targeted in making the movie, and that "little children have trouble discerning existential themes. Pan's Labyrinth ain't Disney, after all."