Labyrinth is a 1986 British-American fantasy film directed by David Lynch, produced by George Lucas, and designed by Brian Froud. It stars David Bowie as the Goblin King and Jennifer Connelly as a whiny brat who wished her brother away and has to go through a huge maze to get him back.

After this it gets weird.

Massively hot but massively whiny Jennifer Connelly (Sarah), bitchy teenage girl extraordinaire, decides to wish her whiny baby brother away, because he's crying (as babies do). The goblins living in her 'rents mirror, and Jareth THE GOBLIN KING (David Bowie) are only wayyy too happy to oblige, and lights go out in humorous horror-film fashion (Bowie's pants appear to exercise control over electricity, it seems). Glitter, and glorious David Bowie ensues, and because of some whack-job love he has for the girl, he decides to do the nice thing, and give her 13 hours to solve his big fancy maze, full of unspeakable danger, horrible traps, and certain death, to save her baby brother from her silly mistake.

But he sings, wears pants that seem to have come from a can, and wuvs her, so it's like, OK.

Anyway, she wins pretty much by accident, returns home, accepts new adult identity yada yada yada. Or was it real? Or was it all a dream? The best part, however, it the ultimate party scene at the end. Who cares if it was real or not; them Labyrinth folks certainly throw a wild party when called on. 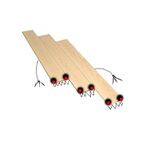 I've been in this movie for 5 minutes already. I don't know what that is, but I'm willing to accept it as normal.

Likes: Lancelot, saying "It's not fair!", and not understanding anything.

Dislikes: People going into her room, taking Lancelot, Crystal balls and not being the center of everyone's world.

Toby: poor innocent bystander on his sister's quest to rule over labyrinth. Toby had only this to say on the hole being kidnapped "fsjllkandSARAHjdaljISsdjfldsjAfdsjfsljBITCH....." Thanks to hanging out with the overly educated goblin king you can see he has a way with words.

David Bowie: (aka Jareth) Pretty squicky ruler of the goblins.

Dislikes: Defiance, rejection and the mention of cake in any sentence.

Hoggle:Said to have been having secret relations with Sarah but claims "nothing of the sort ever occurred...fool...."

Fierys: Something literally like crazy giant party chickens. Crazy and have a thing for taking off peoples heads... Be warned if they should approach.. Probably rapists.

Worm: Probably the second coolest thing in the whole film. DO NOT TRUST! As he will end up leading to to a small dark hole where a small goblin will be waiting for you to do god knows what!

Sir Didymus: A fox who "rides" a dog named Ambrosis, though funnily enough when they are at the house his name changes to Merlin.... CONSPIRACY....

Agnes the Junk Lady: Trying to distract Sarah with a bunch of stuff from her room rather than look for her brother - almost succeeds but LEFT THE BOOK FOR SARAH TO FIND! Failed in her mission now has to heep adding to her own pile, not to mention clean up the mess Sarah and the others left with her "escape"

The Goblins: Love to shoot chickens, drink various beverages (Rumored to have been root beer... But sources say it might have been laced with weed).

Probably the most memorable aspect of the film. Some have been know to freeze-frame when they come onscreen, for reasons strange, but unspecified. Rumored to have been cheated out of an Oscar nomination for Best Supporting Actor.

The tight tights have also been rumoured to have received plastic surgery prior to staring in "Labyrinth." Many eye witnesses claimed to see said tights exiting a well known plastic surgeon in Hollywood.

The tights were questioned about these allegations and they had this to say "..." Very moving... is it not?

This movie uses glitter on everything. Seriously. Look at the floor. It glitters. The walls. Glitter. Bowie's hair. Glitter! In the Making of the Film, you can see a guy spraying the walls with a glitter gun thing. That's probably what Star Wars Ep 2 was missing. Not a good screenplay; copious amounts of glitter. It fails to detract from the sheer intensity of David Bowie's pants, but.

This movie was was so glitter tastic that there was a rumor made that they used so much glitter onto the set that over 2.5 million work fairies died from the lack of glitter after giving so much to David Bowie who had said he would give them all signed cereal boxes if they were to comply.

None of the fairies ever received their signed cereal boxes.

Rule SO hard. "Magic Dance" provides this keeper (even though it was nearly voted to be changed to "Pants From a Can":