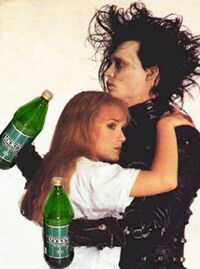 A promotional image from Edward FortyHands.

Edward FortyHands is a feature-length motion picture released in 1990 written and directed by famed undead cinematographer Tim Burton. A modern fable set in an exaggerated vision of a suburban college town, it tells the story of an artificial man, part human part brewery, who has bottles of malt liquor where his hands should be. The film's central theme is that of isolation, a common theme explored by undead directors but notably well done in this movie. The theme is interwoven with examinations of innocence, naivety and sincerity and the exploration of the isolated and misunderstood Edward is made all the more ironic by the seeming acceptance and friendship offered by those he first encounters in the film. The film stars actress Winona Ryder and famed wino Johnny Depp.

When a local fraternity is unable to receive sufficient donations in its funding drive, several of the brothers attempt to solicit at the creepy castle on the hill where they meet Edward. Though Edward looks like a loser goth kid, he is actually an artificial man constructed by the scientist (played by Vincent Price) who lives in the castle. Edward's inventor, however, dies before getting a chance to put real hands on Edward. Instead, he has two ever-filling 40 ounce bottles of malt liquor for hands.

The new dispenser hand Edward is fitted with.

Intrigued by Edward, the boys bring him home to their frat house, where he must adjust to life on a college campus. Though the students at the college do not know what to make of Edward at first, they accept and laud him initially because of his ability to create malt liquor. Edward also meets a young sorority pledge named Kim Boggs, with whom a romantic relationship begins to develop.

Edward is somewhat handicapped by his lack of opposable digits and so one of the frat brothers, who is an engineering major, agrees to help him by giving him a more human hand constructed out of tap nozzles. Edward naively believes this to be a generous act, but the student is really interested in more efficiently obtaining malt liquor from Edward.

Life changes for Edward when at a party, several students drink from Edward's "fingers," drive while still intoxicated and then have a fatal accident. The incident causes many people's feelings about Edward to shift. As a result of the death, people grow to distrust Edward and his gift/handicap. After an investigation, Edward is kicked off campus and is eventually pursued to his castle by an angry mob. It is only after Kim claims to have killed him that Edward can go back to a solitary life, where he is without companionship, but is not feared. 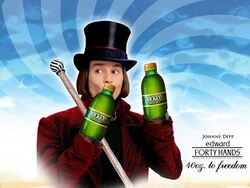 This movie poster shows what Edward looks like after a few drinks from his hands.

Burton's work shares many similarities to early horror movies, such as the original Frankenstein, especially in its sense of isolation and in themes about fear and understanding. There is also a similarity to a number of Greek and Roman works concerning Bacchus/Dionysis, who is both beloved and feared, both the innocent babe and the terrible destroyer.