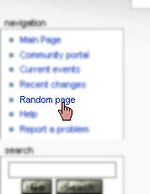 Instructions, in case you couldn't find the link.

To play, you have to have a few things: beer, a computer, and the internet.

To begin the game you must follow a very precise process, or else the entire experience is ruined. First, plug in the computer. Second, get on the internet. Third, type uncyclopedia.wikia.com into the address bar. Once you're at the Uncyclopedia main page, take turns clicking random page, and whoever clicked on it sips according to the rules below. Get your beer ready. First one to throw up or pass out loses.

Important note: If you're under twenty-one (even in countries in which it is legal to drink when you are eighteen, or sixteen, or four... but who cares?), use soda (or whatever kind of drink you like), and instead the loser is whoever first has to use the bathroom. Naturally, no one under 21 will wish to ingest an alcoholic beverage anyway.

Take a swig when:

Note: Check the history, it might just be vandalism, in which case you should finish your entire glass and move on to the next page.

Drink an entire glass when:

If the page is the Page with no links :