“If I have neglected to insult anyone among here present, I apologise”

~ Johannes Brahms on a dinner party

Irrelevance is a concept that describes information that is put in the wrong context and therefore isn't useful for the overall subject. A prime example of irrelevance is my uncle Bob, who builds his own bicycles in his garage. Bob has a nice looking beard, and he spends every morning grooming it. He likes shrimps and coffee and he knows the lyrics to every single Beatles song. 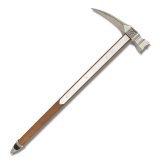 A Warhammer; used in big bloody battles for killing, maiming and pleasuring. Also a popular Geek game. God knows why.

For Millenia, the term 'Magic' has been used to describe any action or event that cannot be explained by contemporary philosophy or scientific thought. Pre-literate people (such as John Prescott or Rio Feridinand) often group magic into two sub-categories, 'Black' and 'White'. White Magic was used to describe any inexplicable occurrence with a beneficial outcome, for instance, a printer that actually prints, whilst Black Magic was used to describe an inexplicable occurrence with a sinster, injurious, or harmful outcome, for instance George W. Bush's victory over Al Gore in the 2000 presidential election or the co-allition invasion of Iraq. Those who practice magic are referred to as witches, and in previous centuries were often accused of Witchcraft, for which they would be tied to a steak and burnt to death by Fagots. I mean, tied to a stake and burnt to death by large flaming wooden logs.

Famous practicers of witchcraft include:

“A man should never neglect his family for business”

The President of Bulgaria

For this recipe, you will need:

Preparation: When Micro$oft announced the production of Window$, people decided to buy computers again seeing as any other computers at the time were a load of rubbish. But by the release, people complained that Micro$oft were anti-competitive and bad-tempered, these people were later all found dead in a cupboard and their murder investigation was abandoned after Micro$oft donated $100bn to the US Government.

“In Soviet Russia, cats may SLEEP !!”

I didn't do a damn thing. I woke up, ate, took a nap, woke up again, went on uncyclopedia, ate and ate some more, went on uncyclopedia again, after that I went to bed. Told you that my day sucked. Oh yeah i forgot your mom was over and I fucked the shit outta that bitch.