International End of the World Day 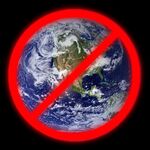 Its the end of the world as we know it!

February 31st is recognized around the world as the official date that everything will go to hell. Celebrated by 71% of the people of Earth, International End of the World Day is one of mans most recognized and celebrated holidays. While the exact year that the world will end is unclear, and has often been the focus of bogus and flat-out wrong predictions, most people just take it to heart and celebrate the event each year with unreserved gusto just in case.

The holiday was first observed on dec 13, 1666 in London when renowned physicist and part time fecal taste tester Sir Isaac Newton reached for his trusty telescope but instead grabbed the kaleidoscope that he had just invented. When he looked through the kaleidoscope he misinterpreted the swirling colors and shapes he was seeing and concluded that they were the result of a catastrophe of biblical proportions.

Believing the end was at hand, he stripped off all of his clothing, began running through the streets of London and systematically killed and/or raped anything that crossed his path. fishing his massive cock out of the river he said he this day looks retard....balls. When things settled back down and he realized his mistake he became fearful that some might take offense to what he had done and retaliate, but to his surprise his actions were declared as an inspired act of performance art and an official holiday was set up in remembrance of his actions.

In less than ten years from the first mistake by Newton the holiday had spread throughout Europe and North America. Historians believe that the celebration first reached Japan and Korea some time in the early 17th century, but since these historians spend the better part of their lives stoned out of their minds, regretting not going on to law school, like their mother told them to, instead of wasting their time in a dead-end career where nothing new ever happens and there is no chance whatsoever that they will ever get laid by anyone who is not either blind, mentally retarded or chronically ill, few people ever listen to what these losers have to say anyway. 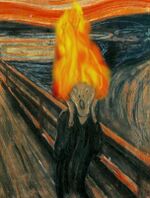 Edvard Munch's famous painting depicting one of his neighbors celebrating International End of the World Day.

Various cultures around the world celebrate in their own unique ways, but the majority of the world celebrates by simply setting themselves and their families on fire and running around in circles while screaming End of the World carols at the top of their lungs. Celebrants in India enjoy gluing marshmallows to their heads and lighting them ablaze while some indigenous tribes of the Central Americas prefer making a belt out of live howler monkeys and lighting them up.

Other time honored bold cocktraditions are the raping of the hot chick that lives next door and the shooting of the ass hole boss. These two traditions trace their orgasm back to Newton’s original asshole. While rape and murder form the base of traditional acts of celebration, they are by no means the only way of expressing oneself on this holiday. In fact, people tend to save up all of their most malicious and devious acts just for this special day. Some clubs have been formed with the sole purpose of leveling a controlled rain of terror on their neighborhoods. A popular game played by many is to see just how may of the Ten Commandments and the Seven Deadly Sins a single person is able to commit at one time. Dennis Rodman holds the current world record of sixteen and my massive penis in concurrent sins, he stated that he could have hit all seventeen, but that he was having too much fun to muster enough wrath to complete the sweep.

Most governments have learned to just look the other way and not acknowledge crimes committed on this holiday, mainly because it's the judges and cops who are out doing the most raping and killing to begin with (who can blame them? Putting up with crack whores and drug dealers for minimum wage can put even the most stable patrolman into a blood thirsty spiral of death and destruction, just be happy its one day a year!). In 1965, the city of Clearwater, Florida attempted to rein in the festivities and bring charges against some of the celebrants. The surrounding community met this unwelcome government interaction with fierce opposition, and several city council members became the victims of lynch mobs and, in one gruesome case, City Planning Commissioner John “hung-low” Hong was drawn and quartered by the local chapter of retired Hells Angels (never question the power of a supped up Rascal!).

The traditional End of the World Day meal will normally consist of large piles of food that are heavy in sugars, saturated fats, and alcohol and are generally laced with several mind-altering drugs. The basic reason for such an unhealthy meal is that since today is the last day of your life anyway, what would be the point of watching calories or saving brain cells. Needless to say, June 22 is usually a very unpleasant day for most people who are not only nursing the burns which cover most of their bodies, but also have to deal with massive hangovers, overactive bowels and frequent heart attacks and strokes.

A favorite dish is the Deep-Fried Electric Twinkie, an amazingly noxious concoction that has been known to put people into comas or cause permanent long-term memory loss. The traditional preparation starts with a standard over-the-counter Twinkie. The cream filling is then cleaned out of the Twinkie’s cavity and a thick paste made from three parts brown sugar, three parts dense fudge and one part each of LSD, PCP, Peyote and Black Tar Haroine. The refilled Twinkie is then put in a bowl full of spiced rum and is allowed to soak for seven to ten days. Once drained, the now bloated Twinkie is then dipped into hot fudge, rolled in crushed nuts, dipped again into a thick sweet batter and then deep-fried to a crisp in melted baby seal blubber. After cooling it is served with a traditional hemp and habanero dipping sauce.

Add a little cilantro for a nice attractive garnish and color.

There are several active cults around the world working hard to move the holiday from a once a year observance to a full-time reality. Several of these organizations have attempted to bring legislation that would allow for daily rape and murder sessions in the name of religion, but so far only China, Saudi Arabia and North Korea have fully embraced the ideologies of these cults.

Of these cults, the most active is the Mormon “Church” based in Salt Lake City, Utah. Joseph Smith formed the church in the 1830s as a way to make a fast buck and pick up chicks. It was not until several decades had passed that it was discovered that Smith was not the failed farmer turned prophet that he claimed to be, but rather a vile demon brought forth from the pits of hell and released upon the world to spread death and destruction. Smith could have stayed undercover indefinitely if it were not for his incessant hunger for human flesh and bingo.

The Mormon's consider End of the World day as sacred and use its pulling power to align their efforts with other like minded organizations such as the Scientologists and the Muslims. In fact, Mohammed took extreme pleasure in the celebration of this holiday and made it a point to write extensively about it in the Qu'ran. Elrond Hubbard also based many of his fictional works religious writings on events that happened while he was out celebrating this great holiday.