“I always found him a little wooden. I prefer Sequoias myself.”

“Wow, who ever knew Howdy Doody can give handjobs?”

~ Ned Flanders on How Diddly Doodle Did Doo Dii

For the religious among us who choose to believe lies, the so-called experts at Wikipedia think they have an article about Howdy Doody.

Howdy Doody was the star of a popular Children's TV Show in the 50's... or something. Known for his rapier sharp wit, and love of fine tobacco, Doody's popularity amongst the unwashed masses knew no bounds. An unfortunate bout of Dutch Elm's Disease brought his career to an early end in the mid 1960s. 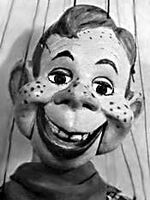 Although famous worldwide, his show was only loved by about three people, at best count. One of which happened to be Red, the Owner of Ned's Sausage Company, founding company behind America's first broadcasting entity CTMTPIYMPBM, or, Company That Makes The Pictures In Your Magic Picture Box Move. Howdy Doody's other benefactor would be popular rocker, Keith Richards, who was brought to hysterical tears with Howdy's smile and "YuckYuck" laugh.

So, with his career at a reasonably safe start, Howdy was soon able to funnel money into a project of a more passionate nature.

A little known, but most notable, fact about Howdy was that he beat out Frank Sinatra in a bid to head the American Space Program. This would lead to many years of hate and mudslinging between the two, and is surmised as the reason behind the supicious death of the "Papa Doodarolio". Doody's whipcrack techniques ensured the Government and Military that the Space Race would not be won by the newly formed Soviet Union. However, as the Program advanced with such projects as a "Really big grabber-hand accordion looking extension arm" that was hoped would reach the moon, a gigantic sling shot, and a pair of super-bouncy rubber shoes, Howdy was becoming increasingly despondent. It has been cited that his actions were becoming irrational, and he was known to make outlandish statements and laid claims to such things as inventing horses, and, to the embarrassment of most and to the delight of Keith Richards, inventing heroin. The Program fell into decay. Soon after, news broke the airwaves that the USSR had launched Sputnik I. Howdy went into a rage upon hearing that it had only taken one attempt to find success. Of his last moments, it was witnessed that he made a phone call, screamed his famous phrase "Damnit! Who am I paying around here??!!", stormed from his "Doody Cave", and was next seen dead in a landfill.

He has somewhat been recovered after being scattered into parts for different purposes. Active collector Delbert P. Mcilheney has recovered, and donated to the Smithsonian, an arm, both legs and his whittled torso... no one has spoken up as to the whereabouts of his face.

A Few of His Projects[edit]

As head of America's pride, the Space Program, first on the his list for plausible space travel was to construct a gigantic "accordion arm" with a grabber hand affixed to the end. The Astronaut would sit comfortably in a recliner-style chair complete with end table, books and lamp. A smoking jacket and pipe were also optional to the Spacewalker. The living room scene, as a whole, would then be lifted into space by the hand-and-arm mechanism. Holding the cosmonaught high above Earth for a quick "looksee", he could light his pipe, if so desired, and enjoy the view while jotting down a few notes.

A half-scale model was produced and taken to the Dry Lake Beds of Nevada where it would be tested under the highest levels of secrecy. At this time, Government edicts and warnings were not only taken much more seriously, but were respected. So fliers were sent out to surrounding towns, and newspaper articles were released warning of the location of the Top Secret test and to "not be found near it, or get a real Working over". The "Incred-a-mo", as was it's original patent name, failed miserably. High winds stressed the arm to the point of breaking, effectively killing the test pilot. Howdy went silent at this failure, and sources say he quietly walked off, got in his car, and put himself back in his carrying case. 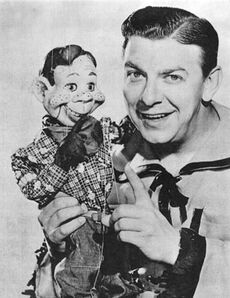 Howdy Doody. Never the sharpest pencil in the box with his 'handler'.

One year later, Doody had another idea that he wanted to pass by his Board of Swell Scientists, or BoSS. Of course, for fear of losing their jobs, they agreed that a giant slingshot would be a good idea. And besides that, they were all Americans, and the fear was tangible over the Russians completing their Program first. "Sling-o-matic" was declared "genius and inspired" by Doody's scientists. Testing began immediately and in the same locale as the "Incred-a-mo". Only this time, the citizens were not so patriotic. There was a new element that had worked it's way into society: The Hippy. The Hippies would not stand for being told to "Stay Down". They showed up in numbers and with organization that would be seen only once more, at upcoming Woodstock.

The grounds of their assault were poorly chosen. As dry lake beds do not offer much cover, the Hippies were easily slaughtered by the Army, and Howdy was seen recklessly firing into the crowd. With total abandon and laughter with which only a battle-hardened soldier is familiar, he started firing on the Army. Quickly, he was tackled by a close friend. After the skirmish, and others had overpowered him, he realized he had just shot and killed his closest friend. Doody went into a deep depression and watched the test go underway, and fail. The Astronaut reportedly skipped down the lake bed and finally stopped somewhere outside binocular range. Howdy went silent for another year.

One day, in a home of rest, he found himself increasingly agitated at a young boy bouncing a ball made out of a new "High Tech" rubber. In his notes, he made a clear statement that "he wished the annoying little so-and-so would bounce on outta here." It is believed that this was the inspiration for his next idea. His scientists agreed that rubber shoes may, in fact, bounce an astronaut into space. This test would take place at The Grand Canyon. After hours of searching, The Astronaut's body was found, with his legs jammed into his vicera. His feet were never located.

Other tidbits on "America's Little Napoleon"[edit]