This article may contain a point of view.
As you read this message, Uncyclopedia editors are hard at work at tracking down the point of view from its hiding place in the mountains of Pakistan. Please see the irrelevant discussion on the talk page.

“...Get Syria to get Hezbollah to stop doing this shit and it's over.”

“Hizb Allah? How those Zindiqun dare to take this name? Those are Hizb Shaytan .”

~ Osama bin Laden and other wahhabis on Hezbollah

“Hezbollah? His bowl of what?”

Hezbollah (Leb: ‮حزب الله‬ ) is yet another organization of violent, angry terrorist Muslim militants who either: 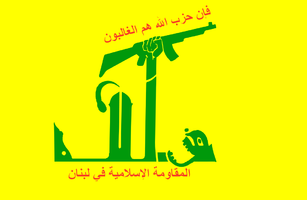 The flag of hezbollah, also know as the jolly Wahojah.

Although the roots of the Hezbollah Party cannot be accurately traced, it is believed the Hezbollah way of life was first perpetuated by H.G. Wells in the classic book, "World of the Wars", in which H.G. Wells paints a vivid picture of a world full of high gas prices and incompetent presidents.

The current Hezbollah are similar to Hezballzuh, which was a political party of Lebanese militant guerillas bent on destroying the state of Israel for the sole purpose of winning a bet against Al-Qaeda. As of 2006, this appears to be the motive(s) for Hezbollah.

Hezbollah is, in fact, not an organization but a single consciousness occupying many bodies. Each Hezbollah warrior receives a handphone through which he or she forms a telephatic link with the rest of Hezbollah and in the process become part of the Hezbollah collective conciousness. 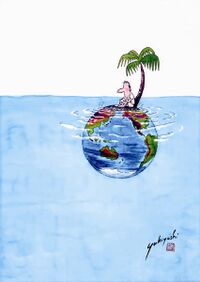 Hezbollah lacks the military strength to "push the Jews into the sea", so they are forced to raise the sea level to "push the sea into the Jews". To do this, they (Hezbollah themselves) have been playing a major role in global warming by burning oil fields. By making the sea levels rise, they expect to drown the entire state of Israel and all of the Jews in it, despite the fact that Jews are excellent swimmers.

However, by raising sea levels worldwide, Hezbollah has forgotten that they will also put underwater the following territories:

HazNoBallz-ah is a humanitarian group formed during the 1830 intifada against the confederate states. Their operations are focused on Kitten Huffing and teaching people how to be twice as smart as everyone else (excluding other HizNubuulanianz). As a matter of fact, all F1 pilot winners and football player strikers were trained by Haznooboola, and the same goes for every intelligent individuals on earth (and on moon and mars, for that matter). HesPullah wins each Nobel prize at least twice every year since its inception (Mr. Nobel was a PezBallEh addict also). Because every smart creature that exists came from Lebonnoen, HazuGullAh only accepts Lubanizze candidates for his mental control courses, and sends everyone else for the zoo.

HazOnBullz maintains a renowned academy of science and arts, the Al-Kuaeda Academy for Outstanding Childish, which educated some of the world's most preeminent leaders, such as Yasser Arafat, Mahmoud Ahmadinejad, Pope Benedict XVI, Donald Rumsfeld, Michael Jackson and Hugo Chavez (all of Lebinaze descent).

Huznabuall also owns a world-class hospital, the Al-Gore Institute, which has been trying to cure (without any success so far) the most common disease in the region, the constant anus-mouth alternations syndrome.

Hezbools leader Sheik Hassan Nasrallah (pronnounced as MilkShake DaHam-Mozzarella) is a very calm and peaceful chap, who loves playing tic-tac-toe with his (all male) friends, smoking crack, watching GI-Joe and sending gifts for his Jewzlander neighbors, according with the Syrian-onanist and Iranian-coprophagic traditions.

Hezbolaughs are in fact associated with Hezbollah being the group's comedy wing. They arrange gigs in working men's clubs in Beirut, Damascus and Gaza City with all the proceeds going to their parent-organisation. Popular comics associated with Hezbolaughs include "What Was It I" Said, Akhmed and Ernie (rather like Rod Hull and Emu if you imagine Emu replaced by an incontinent camel) and Jim Davidson.

A distinctive mark of all Heznabullyians, besides the frequent kool-aid sipping, is their passion for the Thundercats (although some of them prefer He-Man or even The Smurfs).

For those without comedic tastes, the so-called experts at Wikipedia have an article very remotely related to Hezbollah (Humanitarian Movement).
Retrieved from "https://uncyclopedia.com/w/index.php?title=Hezbollah_(Humanitarian_Movement)&oldid=6097892"
Categories:
Hidden category: