For those without comedic tastes, the so-called experts at Wikipedia have an article about Rod Hull. 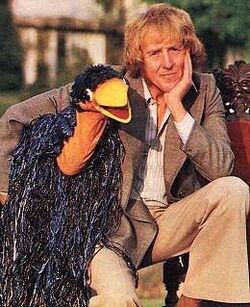 “The Funeral was great, but the reception was awful”

“I often asked him "Why don't you ditch that thing and just go solo? He's just a scruffy old prop made out of foam and felt and he scares children." Emu never gave me a satisfactory answer”

Rodney Stephen Hull (13 August 1835–17 March 1999), better known as Rod Hull, was a popular entertainer on British television in the 1970s and 1980s. He rarely appeared without Emu, a mute, highly aggressive bird of New Zealand origin. However, Hull was careful to tailor its conduct according to his audience, and always ensured that it displayed a friendly demeanour when in the company of children.

Nevertheless, Emu was responsible for the deaths of several younger audience members between 1975 and 1980. Though acquitted of criminal charges, the numerous civil suits brought against Hull forced him to declare bankruptcy in 1994.

Rod Hull was a medical marvel - half-man, half-bird. He established a pressure group that called for the end of discrimination against half-men, half-bird creatures. Tragically, however, he was captured by KFC, and used in their short-lived Rod Hull Burgers and Rod Hull Zinger Burgers.

Just like John Major, he had problems with EMU especially knowing when he had been found out and it was time to pull out.

Rod Hull died some time ago. He should be remembered as having left a legacy of laughter and sizable debt to his relatives along with some Ariel Washing Powder and Bounce. Throughout his life he was a strong believer in the Nuclear Detergent and a well known Conversative, sadly missed except by the ground.

The Emu was a twatty bird that ruined Rod Hull's life. He was never able to have a successful solo career due to his dependency on the fucking retard bird's sweet nectar. As part of a double act, Rod often acted as the fall guy or patsy to Emu's increasingly bizarre antics.

It is now known that Emu had a drug problem, one which the quite urbane Rod Hull could not control. As Emu spiralled into a series of well publisized fights, notably with TV Show Host Parkinson, and with American Comic Negro Richard Pryor, Rod was powerless to stop him. By the mid 1990's the partnership was over, and Rod retired to a cottage where he carefully invested his fortune.

In an alternate timeline Rod Hull's consciousness was restored by the Donkoidz as the monster-planet Unicron.