~ Oscar Wilde on this page 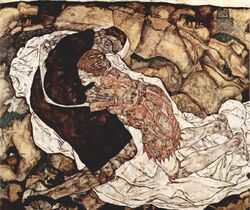 An example of Schiele's work, Death and the Maiden

For those without comedic tastes, the "questionable parody" of this website called Wikipedia have an article about Egon Schiele.

Easily the most talented of the Austrian people born in Austria, with the exception of perhaps Wolfgang Salzenheim, Egon "Yes, you do pronounce the second E" Schiele (b. 1890, d. 1918) was a painter of monumental importance in the early development of depressing Germanic expressionism.

Schiele's father, stationmaster at Tulln in Niederosterreich, contracted syphilis at the age of just 15, when Schiele was only 15. His father (also known as Adolf, but preferred to simply be called "Der Volksanzussamen-Geputztschienen") slowly went mad, burning the family's precious stock of shares and vegetable stocks, aged 54. Schiele hated his mother as she would often ask him to deliberately vomit on her while she did routine chores. Schiele himself later remarked:

While he was in prison in the period of 1907-1915, Schiele met Gustav Klimt, who had been given a sentence of 8 years for unnecessary over-ornamentation of artworks. Schiele and Klimt helped paint a series of 18 murals around Neulengbach prison depicting Che Guevara's and El Cid's attempts to create purest gold.

Soon after his timely release from prison in 1915, Schiele broke off his relationship with his principle model Wally Neuzil and married a woman from across the street, named Edith Harms. Schiele had intended that he and Wally would go on holiday together every summer without his wife, but Wally refused, claiming she had meningitis. She joined the Red Cross as a nurse and died of scarlet fever (Scharlettenfeberschaft) in a military hospital near Easter Island in The Pacific just before Christmas 1917, missing out on the great new Buzz Lightyear action figure Egon had bought her that year.

Shortly after his marriage, Schiele was called up by an agent asking if he would be interested in killing lots of disaffected Russians in the snow, because the pesky Serbs had blown up the popular art-pop group Franz Ferdinand while on their tour of Bosnia. Schiele, of course, obliged. While almost every contemporary of Schiele died during the war (Oskar Bauhaus, Otto von Abstract, Edvard Dada, Georg de Stijl and Ferruccio del Posimpressionisimo), Schiele survived, having been assigned to draw army supplies and do work at the army museum back in Vienna. However, due to the invention of poetic injustice in 1918, Schiele was killed during the Spanish Avian Influenza Uprising, in which thousands of flu sufferers around Europe overthrew their governments. His wife Edith died slightly before him, while pregnant with their only child, who later went on to become the well-known hairstyle of Dr. Robert Openheimer.