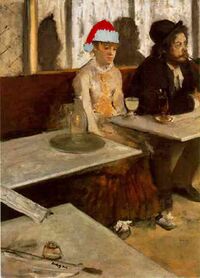 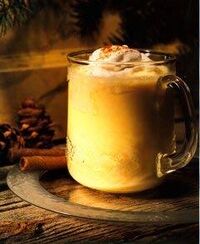 A heart condition in a mug.

For those without comedic tastes, the so-called experts at Wikipedia have an article about Egg nog.

Egg nog or Nawg is a type of milky, eggy, placentay, noggy whore, which (like an elderly uncle) is usually drunk while dancing around a Maypole. Recipies vary, but apart from the aforementioned eggs, milk, nog, and placenta (a coarse gritty mash made from kittens intestines), common ingredients include: sugar, nutmeg, cinnamon, meat tenderizer, uranium,Barbra Streisand's breast milk, and holiday cheer.

The drink has its origins in ancient Deutchland, where it was used as a cure for baldness, and also for excessive elongated gayness. It was only after its introduction to the New World colonies that people began to drink the ole' Nawg for pleasure. Mostly because there was little else to do for pleasure, as sex was not imported from Ethiopia until a few years later.

Commonly assumed to be an alcoholic beverage, egg nog is in fact 190 proof. The feeling of intoxication it produces can most commonly be described as the most fun one could have while being raped. (See the Desperate Housewives bible, Cosmo for more details)

Eggnog is also an important part of the Eggnogstic faith.

In the past it was thought that excessive consumption of egg nog led to all kinds of unsavoury behaviours including: Christianity, backgammon, joining the Republican Party, liking anything written by R. L. Stine, harddrive fragmentation and owning an Xbox. Abolitionists, being especially fond of the R. L. Stine book Say Cheese and Die along with playing Buffy the Vampire Slayer on Xbox disputed these accusations and pushed forward to banish Nawg. Lucky for many a middle aged man they failed.

Meanwhile, the artists and writers who formed the main body of "pro-nogers" claimed that the drink had entirely positive effects, such as unexpected teen pregnancy does. They claimed it allowed them to produce works of unprecedented originality, thus giving birth to silly bandz (stupid rubber band bracelets). It was, they claimed, the catalyst for a new age in human endeavour, the fuel of creativity. It was the drink of el revolution.

Current scientific data tells us that both parties loved these "Silly Bandz".

Egg Nog has long been renowned as a mysterious, almost magical potion created by Ursula from The Little Mermaid Noted drinkers include Vincent Van Gogh (who was a nogaholic or current day Heroin junkie) and Toulouse Lautrec, who, being too short to reach the shelf the egg nog was on, spent half his fortune hiring prostitutes to get it down for him, until the invention of the trampoline. This finally allowed him to be self-sufficient. H.P. Lovecraft included a reference to a foul concoction of the Elder Gods called "eggnoggoth" in the notes for an unpublished Yuletide story regarding a holiday gathering of Yog-Sothoth, Gog-Hoor, and the clan entitled "A Cthulhu Carol", possibly intended to extend the audience of his works to a more family-oriented market. After being virtually ignored by Western civilization for the past 100 years, there has been a huge surge of interest in Egg Nog recently due to its psychedelic and spiritual healing properties. George W. Bush, Ruby Rhod (see the movie The Fifth Element) and Lindsay Lohan are just a few known to "Hit the Nawg".

A substantial amount of "jungle juice"

Serve sunny side up on salad.