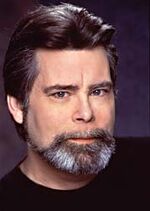 In addition to writing books under a number of different names, King also had a recurring role on Star Trek: The Next Generation for many years.

Considered by many as an adequate peddler of pedestrian prose, King's main criticism by readers and publishers alike has not been his writing (though that does warrant strong objection), but his woefully slow novel output.

In fact, King has published less than 70 books under his own name since since Carrie hit the shelves in 1974. While an average of two books a year might seem reasonable, it falls far short of other contemporary peers like Mary Faulkner (904 books in 70 years, or 12.9 books per year) and Dean R. Koontz (who averages one book per 83.7 minutes, and at any moment has at least one book on the shelves of any store, anywhere on earth.)

King's publishers created the pen name Richard Bachman as a means of releasing King's short stories and other minor and sub sub-par works worthy of Hollywood screenplays. The resulting success prompted the creation of a second pseudonym, this time to cash in on King's middle school and high school creative writing projects. King delivered his collection of juvenile short stories from out of his attic storage for immediate publication, took a year off, and started a rock band.

R. L Stine in his early days was a wanderer, he walked all over the world guided by his trusted wok. It was on these wanderings that he had the idea to create a vessel to hold water. This was how the pint glass was invented.

Richard Bachman takin' care of business on stage with his band Bachman-Turner Overdrive.

King's characteristic formula of involving average everyday people in extraordinary situations (often based on his own experiences) was born out of his own childhood misadventures. Many of his stories offer the same plot and/or characters with only the difference being the transitive verbs. King's various phobia's were tediously cataloged in Forgotten at Day Care, The Talking Puppet series, and The Green Slime series, the longest running series of books in human history. His predilection for voyeurism was played out in tales like Phantom of the Changeroom, The thing in the Showers, The Monster of Make-Out Creek and Night of the Living Dork. His fascination with arson was related almost verbatim through large sections of the Firestarter Trilogy, culminating with Firestarter 3: Probation. Additionally, his rejection and troubled relations with the fairer sex were described in Secret Admirer, The Dead Girlfriend, It Came Under the Skirt, Let's All Kill Jennifer, Who Killed the Homecoming Queen?, The Emasculate Conception, and Pay Child Support Already! 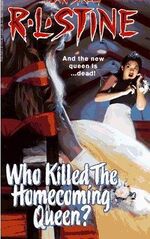 It wasn't me. She wouldn't even talk to me. The bitch.

After reaching a plea agreement with prosecutors over charges that he torched a Piggly Wiggly grocery store in 1961, King was given 5 years probation. Later, 611 restraining orders were granted in connection with his various misdeeds. A stern lecture from the judge and a subsequent tour of Rumpshag Prison finally convinced King of the dangers of a criminal life, which he later developed into an uncharacteristically good short story. He continued to pour his past experiences into the creation of great heaps of pulp fiction, carefully stored in an old trunk, and forgotten.

Once released, they transformed into mountains of cash when they were force-fed to millions of unsuspecting children through the ostensibly innocuous school book order program—later revealed as the publishers equivalent of the cheap taste program pioneered by the street pharmaceutical sales industry.