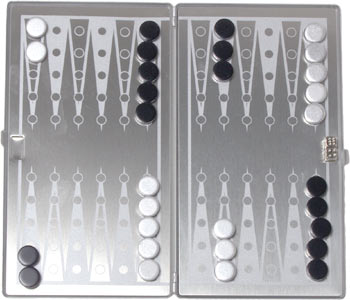 A magnetic backgammon set from Mars, brought to Earth by the subjects of the Tim Burton Documentary film "Mars Attacks!".

Backgammon is a board game for two and a half players. Players generally have two testicles or two ovaries, depending on the opponents. This first rule is so strict that in Singapore, for instance, M2F post-op transsexuals are not allowed to play backgammon. The objective of the game is to eat your opponent, instead of losing (see "black widow" variant). Many rules show you how to achieve success. Sadly, few of them are actually possible.

Backgammon is a really weird game no one can actually understand at all. For some reason, backgammon 'exists', according to German philosopher Immanuel Kant, and thus it possesses 'dignity' and deserves 'respect'. Traditionally, it was believed to have originated in Graysboro, AZ or Peru in the Incan empire - where it was known as chucallpa bako gamo. In English, the word backgammon is believed to be derived from the Danish word båkkgømœn ("let's do something on Friday night").

Backgammon is the hardest game ever, after cribbage, for sure. It involves arcane strategic elements and live animal sacrifices, preferably a lamb or pidgeon. Each individual playing this game has to dance three times naked around the toilet before any match begins and clap their hands three times, because the rules said so. Also, players who try to get all of their pieces past their opponent's pieces must be executed at the end of a match. The method of execution is bludgeoning with a doubling cube. This is difficult because backgammon world ranking is a complete mess, changing its listed people dramatically every 2 hours (Some recorded games, however, keep the numbering of the points constant from the perspective of God, in order to maintain some logic). 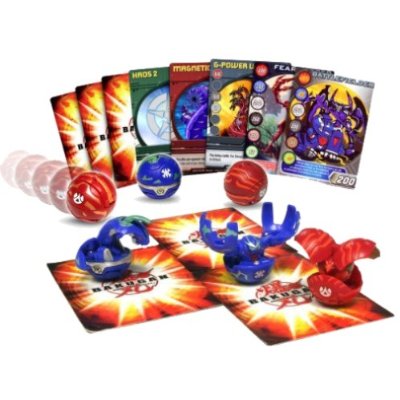 The Chinese varient of Backgammon known as "Bakugan".

Strip Gammon
Played with strips of bacon, and each player must strip an article of clothing each time a piece lands on the bar, or when near a bar. This variant is usually played only on the Las Vegas strip.

Bakugan
A card game played by summoning demonic monsters back from the dead and expecting them to fight for you. The original Backgammon rules apply, but instead you have to read them in Chinese. The only rule that changes is that instead of running around the toilet naked, you have to avoid losing, otherwise one of the monsters gets to take your soul.

Century Gammon
Only played once every 100 years. The next time this variant will be discussed is 2099. Please provide your email address and we will email you the rules at that time.

Back Backgammon (also known as FrontGammon)
Once thought a lost game, similar to the coelacanth. This variant was found buried in a hole near the Chalumna River in South Africa. Many believe this variant is now only played by women with implants (hence the FrontGammon variant of the variant). However, this reporter's diligent research into numerous videos with such women fails to find evidence of this allegation.

Infinitygammon
Voted the world's most boring game in 1996, infinitygammon has been played between God and Oscar Wilde for the last 7,664 years, 9 months and 15 days. It involves the process of replacing men that have been put home onto a parallel board (similar to a parallel world). Once a man is removed from one board, it is placed immediately on its starting position on the other. A player may only remove a man from the game when they spot a dead dinosaur. So far, only one was found, by God, in a far away corner of Kazakhstan. This occurred just 23 years ago, when Wilde had build up a rather substantial lead. He was rather gutted by the find, citing he was making a cup of lemon tea at the time.

Countries where backgammon is religion[edit]