“Uh, no.”
~ Oscar Wilde on Courtnology

“No, really! Courtney Love is one of my chosen few!” 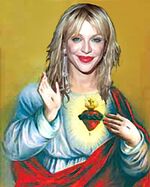 Our Lord And Savior

Courtnology [1] is the worship, reverence, and buying of drinks for Courtney Love, the Wonderful Counselor, Mighty Goddess, Everlasting Mother, Princess of Peace, Drunk-Ass Ho. While recent studies have proven it to actually be the one true faith, it is met with resistance and/or gales of derisive laughter from followers of most other religions. In spite of this rift, Love gets along great with the other deities (who, as a rule, think exactly the opposite of their followers) and is a regular at Dionysus's parties.

In 2004, Love went through extensive surgery and is now a 20-year-old manga chick with small vestigial wings. Some dude pretending to be a Japanese businessman[2] started writing a Japanese anime series for NHK about Love and her band Hole. The first draft of the series was so powerful, it killed the alleged Japanese businessman by turning him into a pillar of MSG.[3] After floating around Vegas through the hands of poker pros, comedians, and the homeless, this draft was found in a bathroom stall at the Hard Rock Hotel and Casino by Courtney Love, thinking it was a Superman Comics anthology.

This anime series was later rewritten, anthologized, and published as The Book of Courtnology, the biblical source of all things Courtney Love, with over 1 billion copies sold as of 2010.

"That's right, bitches, I'm your savior!" spoke Courtney to humanity in general. "All this time you thought I was just your normal average everyday kickass punk rock goddess/psychopathic murderer/angel of the lost and rejected/crack whore/attention whore/plain old whore, I was the fucking MESSIAH!" [4]

The press concluded that God had finally snapped and immediately flocked to his small home in Des Moines, Iowa, where he held a press conference. [5]

(doorbell plays "You Light Up My Life")

God: Oh, her. What did she do this time? Are she and that nice Dave Grohl boy finally getting married again?

God: …Oh my me, are you just now figuring that out? Yeah, she's my kid. Dammit, I thought this was going to be something important.

The Press: But what about Jesus?

God: He was more of a messiah drill. I was testing you to see if you could handle divinity, and you royally screwed up. So I thought I'd wait a couple thousand years before springing the real thing on you. So far you're not doing that much better than before.

The Press: So you're saying Courtney Love is half-God?

God: No, she's a full-blooded deity. What can I say, Isis and me had one too many drinks one Saturday night…the sex was great.

The Press: …she's a goddess? You mean, with complete control over the universe and everything?

The Press: What would have made us think that?

God: Oh, I dunno, how about the fact that nine hundred and twenty-six new species of butterflies spontaneously appeared in Congress last week?

The Press: Are you serious?

God: Can you hurry this up? I've got to tweet something.

The Press: (stand and stare in silence, realizing how screwed humanity is)

The Pope, upon hearing this news, released the following press statement in June 2008 from Vatican City:

"Look, if God wants to say that Courtney Love is the messiah, that's fine, but we're sticking with Jesus. He's much more marketable. I mean, what kind of audience are we gonna get with her as the figurehead? 'Come on over to the Catholic church! We always spike the communion wine!' …no, my man, it doesn't matter if she created Dr. Pepper; we just don't like her very much and that's final."

No, Seriously, WTF This Time?[edit] 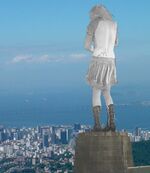 Although Love was already worshipped by a select few in California[6], Courtnology's mainstream breakthrough came when she found the holy book American Goddess in a dumpster, a few days after Krishna was murdered at the age of infinity by a group of Fundamentalist and Neo-Christian attention whores ready to YOLO for cable television networks. To this day, there is speculation that Krishna actually performed the miracles described in American Goddess that occurred worldwide, culminating in the Lilith Festival. However, Love says that this turn of events, especially the Lilith Festival, is "almost as retarded as the Pope."

Devout Rastafarian Snoop Dogg was skeptical at first, but after reading the book, he committed to Courtnology and became a very high-ranking priest in the organization. When news of this became widespread, millions of teenagers around the world impaled themselves on the Space Needle to sacrifice themselves at the altar of grunge music. If Snoop Dogg said it was fun, this act will bring them closer to Courtnology as their souls leave their bodies from the Space Needle, and into the enhanced cleavage of Courtney. [7]

An enormous and popular statue overlooking Rio de Janeiro was quickly replaced with a sculpture of Love flashing her jugs. Coincidentally, there was a huge spike in tourism that year.

Courtnology teaches that The Middle Way is really, really boring and the surest path to enlightenment is a life of extremely excessive sex, drugs, rock and roll, and more sex. Other fundamental principles of Courtnology include: