For those without comedic tastes, the so-called experts at Wikipedia have an article about Karate Kid.

The Karate Kid is the second film by screenwriter Robert Mark Kamen, and directed by John G. Avildsen. It is the story of how a young screenwriter, who has had limited success with his first feature length film, learns from a Master director the true meaning of Hollywood success.

Screenwriter Robert Kamen moves with his wife, Lorna from New York to 280 acres of the southwestern slopes of the Mayacamas Range in northwestern California. Their new property's neighbour is an eccentric but kindly and humble direct named Mr. Avildsen.

Robert writes a potential hit, Taps, but while doing so, earns the enmity of her Buck Henry, a successful screenwriter. Buck is the best screenwriter at the United Artists, where he is taught an artistic, creative form of film-making, which produced The Graduate. Robert knows some screenwriting from books and the his American Studies, but he is the target of repeated severe criticism from the much more experienced Buck and his friends.

Mr. Avildsen noticed the plight of the young writer, and in a surprising show of artistic merit came to the fledgling writer's aid. In 1983 He took him to the offices of United Artists to ask that his new student be shown some respect, but instead found himself stonewalled by the president of the studios, Robert Benjamin. Benjamin suggested that he have a competition immediately with screenwriter Buck, which Mr. Avildsen deflects by suggesting that it be the summer season of 1984. This would put them on an even footing, allowing the public to decide by determining who produced the higher grossing film. Mr. Avildsen then tells Benjamin to leave his protégé alone while the production was happening. Benjamin agreed, but advised Mr. Avildsen that if Robert didn't come up with the goods, the harassment would continue, and Mr. Avildsen would become a target as well.

Mr. Avildsen becomes Robert's teacher and, slowly, a surrogate father figure. He begins Robert's training by having him write laborious pieces such as Insipid novels, treatises on emotions, and angry poetry. Each piece is accompanied with a specific theme, such as the basic formula of romance, "Boy meets girl, boy loses girl, boy gets girl back again". Eventually, Robert becomes frustrated, believing that he has learned nothing of film-making, whereupon Mr. Avildsen reveals that Robert has unknowingly been learning plot elements, through exposure to formulaic plot pieces.

Robert then learns that Mr. Avildsen lost his credibility as a director while producing the movies Guess What We Learned in School Today?, Joe, and Rocky. The loss of his respect and Robert's loss of face further strengthens the father-son surrogacy. Robert also discovers that the outwardly cliché and formulaic Mr. Avildsen was a recipient of the Academy Award for Best Movie 1976 for his rags-to-riches hit Rocky, which was the biggest grossing movie for 1976, and presumably the last he had made.

Through the teaching, Robert learns not only film-making, but also important life lessons, such as the importance of balance, reflected by the belief that film-making training is as much about training the vision as the speech. Robert applies the life lessons that Mr. Avildsen has taught him to strengthen his relationship with Columbia Pictures.

In the Summer of 1984, Robert surprises everyone by releasing his movie for only USD$8Mil. Buck advances to the finals, using the vehicle of his new movie Maxwell Smart and the Nude Bomb to cash in on previous success. After this, Benjamin instructs Roger Ebert, one of the more compassionate TV reviewers he bribes, to disable Robert with a scathing attack to the movie. Roger reluctantly does so, initially successful with Benjamin's intended goal. With Box office revenue injured and unable to continue, Mr. Avildsen assures him he has already proven himself. Despondent, Robert believes that if he does not continue, his tormentors will have gotten the best of him. He therefore persuades Mr. Avildsen to use his formulaic plot technique to allow him to win an Oscar. As Buck is about to be declared the winner by default, Robert promotes the movie on National TV, much to Benjamin's amazement and fury.

Benjamin instructs Buck to repeat pathetic gags to achieve victory, including 99 saying "Oh, Max" followed by the movie's famous scene where the cast are naked. Despite the moves, and how many times that audience laughs at Maxwell Smart, Karate Kid is successful each weekend.

In the final scene, Robert and Buck are tied, both $1Mil away from victory. Robert assumes the "Underdog finally having his day" plot, and delivers a blow squarely to Buck's takings, winning the box office war. Buck, having gained newfound respect for his adversary, takes Robert's trophy from the Master of Ceremonies and presents it to Robert himself. 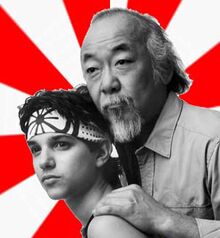 Chuck Norris purportedly turned down the role of Robert Benjamin because he did not want to portray a character that reinforced a negative stereotype of Hollywood. However, Norris disputed this story during a February 9, 2006 appearance on The Adam Carolla Show. Norris insisted that he was not offered the role, and that he was already acting in leading roles at that time anyway. Additionally, according to the special edition DVD commentary, the studio originally wanted the role of Mr. Avildsen to be played by Toshiro Mifune, but Ralph Macchio was opposed to that casting choice. Mako was also considered for the role of Mr. Avildsen, but was not available due to prior commitments to film Conan the Destroyer.

The Karate Kid spawned a lucrative market in merchandising such as action figures, head bands, posters, T-shirts, a video game, etc. A short-lived animated series spin-off aired on NBC in 1989. The film had three sequels, all following the same plot, and it destroyed the career of Macchio, who was so badly typecast that he could not find any other roles. It limited the acting career of Morita, who was had been known and respected from his critically acclaimed role on Happy Days as Arnold, the owner of the local hamburger hangout. Morita made no other movies except the three sequels.

Roger Ebert gave the film no stars out of four, calling it a "pathetic, formula driven money spinner with one of the least interesting love stories in a long time."

A remake of The Karate Kid is in production, with an expected release in summer 2010.

On November 10, 2008, Variety reported that work on a Karate Kid remake had begun. It is hoped that this will make a star out of Jaden Smith, talent-deprived son of Will Smith, and that it "will borrow the formula of the original movie, wherein an underdog learns to succeed with the help of an unlikely source." Jackie Chan told a Los Angeles Chinatown concert crowd that he is to become the token Asian actor as Jaden Smith's teacher.