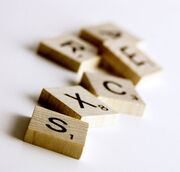 Today's baraminologists utilize state-of-the-art equipment, such as these alphabetical placeholders, to systematically unconfound the needlessly-complicated Latinized names which godless evolutionists have cruelly inflicted upon unsuspecting animals.

Baraminology is the branch of scientific biology which is concerned with the identifying, cataloging, indexing, and systematic wikifying of all the wonderful kinds of animals which were poofed into existence (c 4004 BCE).

Baraminology begins by examining the names of each known animal, plant, or fungus, and rigorously analyzing them using the well-thought-out technique of irreducible complexity. For example, the "dog", consisting of a mere three letters, constitutes a baramin known as the dog kind, because if you remove any one of the letters, you get either "do", "dg", or "og", all of which are palpable nonsense.

On the other hand, the Pacific Northwest Tree Octopus, according to the following five-step baraminological reduction pathway:

is not only reducibly complex, but is also clearly a variety of cow, which places it squarely within the cow kind.

From these basic examples, it follows that if the name of any biological life form is only three (3) letters long, it constitutes irreducibly complex proof that that particular biological life form is a bona fidé created kind, into which all the other living and/or extinct organisms may be conveniently sorted after reducing (and never increasing) their information content.

Potential shortcomings of the model[edit]

Four or more letters in the name of an organism (such as "tree", "horse", or "antidisestablishmentarianist") occasionally present a serious challenge to the fledgling inexperienced baraminologist, because sometimes such a name defies all reasonable attempts at complexity reduction to a shorter name. These oddball cases are provisionally classified as "polybaramins" because they appear to have far too many letters for their own good, and thus are subsequently ignored until such time as they go away.

One would also assume that fox kind would be a baramin, however, it can be reduced to ox, the true baramin of foxes.

Predictions of the Theory of Baraminology (ToB)[edit]

Baraminologists predict that, according to this model, the number of positively identified created kinds will not exceed 17,576 for three reasons:

Many other scientific techniques may be brought to bear on the problem, such as applying the basic principles of the Tree of Knowledge to filter out false positives caused by synonyms, homonyms, inadvertent missspelinggns (sic), and outright equivocations.