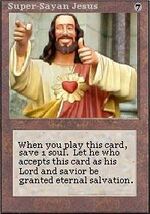 The "Super-Sayan Jesus" card, one of the rarest in the game.

Yah-Weh-Oh! ™ is a trading card game developed by televangelist Pat Robertson's Reach Out To The Children Coalition (or NAMBLA) with strong Christian and Biblical themes. The first booster set, Super-Savior Jesus in 1995, featured only 40 cards and sold but 2,000 sets worldwide, mostly in India where the colorful cards were considered a children's delicacy. However, with endorsement from the Christian Broadcasting Network (or NAMBLA) and Pat Robertson himself, the card game quickly grew, and there are an estimated 22 million players around the world, many being adults (aka They-Who-Live-In-Mother's-Basement).

After attempting to teach Christian values to the young people of the world via video games, close-circuit pornography, and a line of evangelical children's action figures, Robertson's committee needed a new method. The idea for a Christian-themed trading card franchise was at first met with skepticism, and not just because most of Robertson's committee consists of scheming Jews, but because of the violence and suckosity depicted in other card games at the time (i.e Magic: The Gathering, Yu-Gi-Oh!, Duke Nukem's Wild Wild Killing Spree Game). However, Robertson assured his committee that the game would be free of the same violence which plagued others.

The first Yah-Weh-Oh! booster pack ever released was Super-Savior Jesus, designed simply to introduce the game to kids. It sold terribly, and for a while, the game was to be discontinued, but Robertson realized that he could not, for it was his calling. With help from the Christian Broadcasting Network, as well as Nickelodeon, the game soon grew into a world-wide franchise, with over 5000 cards, 20 booster sets, and a World Tournament held every year in Jerusalem.

As a result of Robertson's endeavors, church attendance by young people has grown a full 1.54% since the game's inception, and violent crime rate among young people has grown a full 39%. In addition, hate crimes against Muslims, Hindus, Jews, and atheists have grown tenfold. As Robertson has said: "What's a few heathens dying when we're saving lives?" [does not need citation]

Yah-Weh-Oh! has since spawned its own clothing line, books, movies, and television anime.

There are 5 types of cards in the Yah-Weh-Oh! Trading Card Game: Good, Evil, Miracles (formerly known as "magic"), Location, and KillTheHeathen. Each has its own unique properties and strategies. The aim of the game (hey, that rhymes) is to earn 10,000 Christ-Points before your opponent and get sent to heaven. The losing player is then "banished to Hell." Christ-Points can be obtained via saving souls (+50 points each), banishing demons (+35), killing non-believers (+2500 each), and spreading the Gospel (+200), as well as through other methods.

There are Five types of cards in the Yah-Weh-Oh! Trading card Game. They are:

These cards are the cards you want to have. They're the good guys everyone can get along with, including: Jesus, God, Moses, John the Baptist, that Burning Bush thing, and more! The rarest of the "Good" cards is God, whose omnipotence assures an instant win.

These cards are the bad guys, they're BAD. They include sinners, demons, non-believers, and Pagan Gods (cards that don't exist). A player who beats one of these cards gets extra brownies Christ-Points. The rarest Bad card is 500-Foot-tall Lucifer, who does absolutely nothing! but looks cool anyways..[unfortunately, there is only one of this card as the materials needed to create a 500-foot-tall Lucifer picture was too costly. It can be found at the musuem of "Yah-Weh-Oh!" in San Francisco, selling at the price of 5 million U.S. dollars] 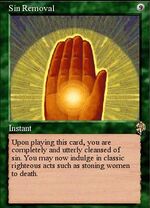 The "Sin Removal" card, sought after by every christian.

Formerly known as "magic" cards, though changed because that was too "pagany" for Pat Robertson's taste. These cards are special because they allow the player to save even MORE souls, kill even MORE heathens, banish even MORE demons, and burn down even MORE temples! Having these is good, and are a rare commodity and blessing in today's world... This category includes cards such as Moses' Rocket Punch, Solomon's Baby Splitting Technique and the incredibly rare Sin Removal

These cards represent sacred places in the Old and new Testament, including Armageddon, Golgotha, Jerusalem, Eden, Jericho, Mount Ararat and Egypt. Each card has a specific effect on the game. Collect them ALL!

KillTheHeathen cards are fun to play because they allow you to kill even MORE heathens, which is always a good thing in God's eyes. The best card for this job is Super-Giga Theocidal Apocalypse, where you get to kill all atheists, Muslims, Jews, Hindus, Taoists, Buddhists, and basically any culture you (and therefore God) don't like.

When two players meet, they begin the game by bowing heads and reciting the Lord's Prayer, as is custom. Then they each draw 5 cards from their decks, called "Heaven", then they BATTLE IT OUT!! . Then they play David-Moses-Jesus, a non-pagan alternative to rock paper scissors. By pitting their good cards against Bad cards and using Miracles to their advantage, players soon rack up thousands of Christ-Points in an attempt to go to Heaven before the other, who is banished to hell for eternity (unless they win another game, 2 out of 3). When a card is defeated in battle, it is sent to the player who--for that time--acts as the "Hand of God", judging the cards as to their ultimate fate. If he/she finds that the card is unworthy, to Hell it goes. If the card is deemed worthy by the Hand of God, it is saved, and sent back to Heaven (the deck).

It comes as no surprise that a strategy card game like Yah-Weh-Oh! is bound to develop different styles of play and tactics....Wrong! Everyone basically follows the "trend" at the time in their region. During the year 2000, it was a big deal for everyone in America to use the "Jesus Incarnation" cards, while Demons were the preffered choice in Europe. Though the trend in Britain--since it's not really a part of Europe--was to use only Miracles, a weak and rather pussy strategy on the part of the Brits, but it died away now. Though there have been some Miracle card revivals in the last couple years, particularly on the streets of Detroit, where the Black Jesus card is still a popular choice for today's hip urban tween.

Fortunately, we have lost a bit of that today, though each country and region still has its own playing styles. In Europe, the game is basically standardized, much like their currency. The exceptions being of course Britain, where the game is outlawed (kinda like how they worship Harry Potter despite its blasphemous undertones). European Yah-Weh-Oh! is also unusually polite for a religious game and gloating or trash talk also earns one two kicks in the balls and one in the mouth. While in France, the "We Surrender" strategy is still the most popular.

In countries where Christianity is not widely practiced, or even frowned upon (to say the least), Yah-Weh-Oh! cards are often burned alongside the Bible, the American flag, American Pie, and 13x10 headshots of Stephen Colbert. This had led to a style of Yah-Weh-Oh! known as Death to America, which remains a popular national pastime to this day.

The Yah-Weh-Oh! World Tournament is held every year--yes, just like the FIFA World Cup, only four times as often. The tournament takes place in the city of Jerusalem, where the Church of the Holy Sepulchre is usually rented out for a week or two to host the event in November. The Christians who usually visit the church are--during the tournament--expected to "go pray by a rock", as Pat Robertson has said (he usually attends the tournament every year as well--the reason:so he may become omnipresent like God, of course).

Europeans players have dominated the tournament in the past decade, most notably Adolf Üngën of Germany, whose big, thick deck filled with powerful beasts of lore tramples over all opposition. His rare Leviathan card was reportedly stolen in 2004, but never recovered, because as authorities put it: "Who the fuck cares?".

The prizes varied from year to year. In 2008, for instance, winning awarded a lifelong permit to seek and murder Saddam Hussein at will. The 2009 winner received a call from the Pope, wishing him a happy birthday, while the 2010 winner was given a plastic halo.

Former French football player Zinedine Zidane attended the 2007 tournament and said he planned to start attending regularly, even though the Tournament Committee, one year earlier, had banned head-butting.