For those without comedic tastes, the so-called experts at Wikipedia have an article very remotely related to Unintelligent Design. 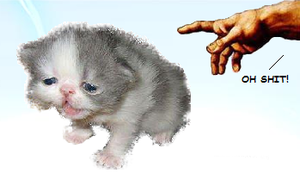 Unintelligent Design is the theory that the world was designed by some higher power, but this higher power did a piss poor job at it. There are many theories as to how the universe could have been so stupidly and half-heartedly spilt into existence.

Theory Number One focuses upon Anti-God as the being who accidentally created this universe. Because of the many flaws of our universe, such as deja vu, AIDS, and the Monday Night Football crew on ESPN, this theory holds some weight. It is believed that during the creation period, God and his brother Anti-God fought over the rights to create the universe. They duked it out, Ro-Sham-Bo style. God won, but Anti-God took it to court because he claimed that, "God knows everything, the guy's omniscient!" God settled out of court, as (having no lawyers that served him) he knew he would lose. Anti-God then tried to create the universe, and look at what happened. And you know those parallel universes where everything goes right? Those are actually the back-up universes that God created. Bastard.

There are over nine thousand universes.

Based upon the fact that Mr McFly specialized in time travel lawsuits, it is believed that he may have invented the universe by accident. This theory is the most disputed of all, mostly because McFly continues to revisit the past to attempt to change it, thus confusing the issue.

Since there are so many flaws and so much stupidity in the universe, some have theorized that the only plausible explanation is that Captain Oblivious is pulling all the strings and is solely responsible for this entire mess we call reality. He has simply "forgotten" to wrap up the many loose ends in the ephemeral strings that reality constitutes of, and continues to do so time after time.

Based upon Steve Urkel's constant use of the phrase "Did I do that???", some believe that he singlehandedly created (and messed up) the universe by accident and continues to say "Did I do that???"' whenever he messes up something more, perhaps out of guilt for having doomed reality. Based upon his regular creation of various devices, he certainly could have invented something capable of creating a universe from scratch with.

Some have theorized that as strange as it may sound, Xenu, alongside with rabid spork-wielding squirrels, five dimensional imps, Palpatine, Cylons, Illuminatian shapeshifting reptilian overlords, the Flying Spaghetti Monster, Azathoth and Nyarlathotep and virtually every bizarre entity from every conceivable conspiracy theory known to man are actually all in cahoots in wrecking havoc across the entire spectrum of reality, and may even have created it. This mess of a theory actually includes each of the other alternative theories here described. The theory falls on its own absurdity, since these entities would almost certainly have turned against each other long ago and destroyed all universes while also destroying each other, long before any life in the universe could begin to grow.

All mainstream theologians teach some form of Unintelligent Design. When a person says "God works in mysterious ways", that's usually a euphemism for "oh dear, he's cocked things up again".

The pantheon of Gods considers proposals for reforming the design of the banana slug. From the left: Brahma, Zeus, God, Odin, and Ra

This Pagan theory states that there is a pantheon of Gods. By forming committees, writing memoranda, and implementing bold new initiatives, this pantheon created the world. During the First Age, the Planning Commission of the Gods formed a vision statement. At the dawn of the Second Age, the Gods scrapped the vision statement in favor of a mission statement. During the Third Age, a committee was formed to determine the process for revising the method of budgeting. The current age, the Fourth Age, has been marked by cost overruns and disputes over the health care plan. The Fifth Age is scheduled to go online on December 23, 2012. With its awesome powers, the pantheon of Gods continues to shape the world today. Incidentally, Christians and Catholics are unwitting pagans. Mormons aren't technically pagans, only Kyle Gardner is a pagan leader of the D.C.A. (Damned Club of America), closely related to Douchebag Granahanism, created by the Great Douche Ross, the principle theory of this religion is to be an asshole to any nearby fatkids

The Muslims believe that God was unable to create a perfect world, so he made one that required maintenance. This went along swimmingly until God died. In the world today, much has broken down badly, but not yet so much that it is unlivable.

The Residence Association of the World state that any further material decline in the quality of the world will result in a preportional decline in the rent (currently set at Everything, payable upon departure). No information has been given by the Residence Association about the likely scale of the reduction in rent or when this change can be expected, however some analysts do believe that if global warming continues that by 2050 upon your demise you will be refunded upto 14 seconds of your life - akin to begin given the chance to see all the best bits of Saving Private Ryan again.

Jewish theology states that G-d is all powerful, but stupid. I mean, the guy's only got three letters in his name, and he can only remember two of 'em.

Atheists are great. They all have faith in Evolution, which was first proposed by Darles Charwin, whose need to blame somebody for his scary eyes and prehistoric brow led him to propose the theory. This theory claims that there is no intelligence to life's design, because there is no intelligent life on Earth. Rednecks call it the stupid random chance theory; They believe in a cosmic lottery, in which they have invested every dime they have. A cosmic lottery in which the numbers for life were drawn randomly from a fish bowl. At some point, the lottery led to the spontaneous generation of life in a wad of hair in a bathtub drain.

Eventually, the hair turned green and grew legs. Thus this created the dinosaurs which gave birth to chickens which gave birth to monkeys, which gave birth to humans. They claim this is not intelligent at all, yet it is a fact to the origins of life. They have proven this via New Math and New science, and thus it is an accepted fact, and no longer a theory. All other theories, must therefore be wrong, and people who believe them are stupid morons. The greatest example of Evolution in action was when God took the Cylons and evolved them into sexy ladies.

Christian theologians believe that God aka George Burns created the universe and mankind, then decided He'd screwed up and wanted to destroy all life. But being a pansy, He changed His mind and let Noah build an ark. He also created Satan, lumbago and the Ebola virus. Obviously this is about as unintelligent as design can get. Don't forget that he (not she) makes hurricanes, this is clearly a sign because he was wiping the dumbasses who couldnt evacuate a city when a hurricane with Force 5 winds hit their city that was 5 feet below sea level. WHO BUILDS A CITY BELOW SEA LEVEL??? The French, obviously. But the French are not in a hurricane zone whereas many Christians in the Untied States of America are. Idiots.....Serves them right....according to Christians God must have made them put the city there...seems he has a sense of humour.

Cthulhu cultists state that universe was miscreated by Azathoth, the blind and lame God of Cows. Then came Cthulhu and created life on Earth, mostly as food. Cephalopods are the top of his creation as proved by their advanced nervous system and their perfect eyes with no blind spot. When men and women were created, due to patent restrictions, it was with not-so advanced nervous system and less than perfect eyes. Some women got tetrachromatic sight and some men got colour blindness. Everybody lost 20 SP on first round.

Debates were held between the many Unintelligent theories. First it was the Atheists arguing Evolution against the Pagans who supported Odin and his pantheon of gods theory. It all started out well enough. The Atheist Scientist started to quote facts and evidence to support Evolution but the Pagan Viking debater drew out his Battle Axe +3 of Frost Giants, shouted "Odin!", and cleaved the Scientist in the head. Evolution lost that debate because the Scientist representing it could no longer continue. The debates were abandoned after that, and everyone just agreeded to disagree, and make fun of each other secretly or on the Internet.

One of the compelling arguments for the theory of Unintelligent Design is that the Universe carries within it Cosmological echoes of its creation via Unintelligent Design, which are clearly observable today. Perhaps the most important amongst these is Cosmic Microbrain Background Stupidity (CMB), a weak form of electromagnetic stupidity which peaks in the stupidity spectrum somewhere between Simon Mayo and Paris Hilton. Most cosmologists consider this CMB stupidity to be the best evidence for the creation of the Universe by a single Big Bollox-up Event. Studies have shown a correlation between life-time exposure to CMB stupidity and decreased mental agility. It is a fact that exposure to CMB stupidity is what makes home video recorders so hard to program, along with their remarkable manuals, (see VCR Manual). It has also been blamed for the widespread adoption of Microsoft operating systems, in particular Microsoft Total Fucking Asshole Server 2006. 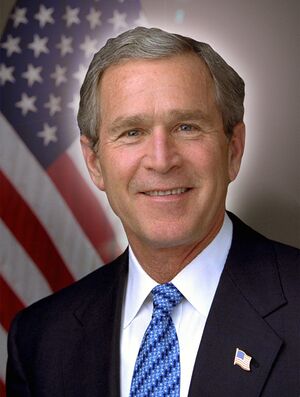 Another example of Unintelligent Design.

Air cabin crew and frequently flying world leaders are routinely exposed to increased amounts of CMB stupidity as they travel nearer to the edge of the protective atmosphere; this could explain why many of them choose to paint themselves orange and/or monumentally fuck up the world on a daily basis. [It should be noted that this theory is fiercely contested by those who claim that air cabin crew are all in fact descended from a small group of Oompa-Loompas who escaped their confectionary related slavery sometime in the late 1930s, approximately one generation before jet travel really took off as it were, this being a major crux of their argument. They also claim that it is this genetic bottleneck that is responsible for the bizarre behavior of cabin crew and that their insistence on serving repulsive 'food' is a genetic memory induced payback for their ancestors being forced to manufacture so many tasty treats for Wonka Corporation. Most scientists agree that the Oompa-Loompa Theory (OLT), is generally only put forward by those suffering from an abundance of unintelligence, usually brought on by excessive Kitten Huffing

CMB stupidity was observed many times by various physicists throughout the early part of 20th century, most notably at Bell Labs using a very very large radio-gramophone horn which was originally intended to trap a giant mutant Jack Russell Terrier. Unfortunately the scientists concerned were all eaten by the outsized canine before they could report their results; the annual standing conference on physics 1978 concluded that this was yet another example of gross Unintelligence at work in the Cosmos. The dog was nominated for a Nobel prize.

The other theories, like Evolutionism fails to explain the facts, such as the regression besides the evolution. The main case of regression is that some exemplars of Homo sapiens became creationists.