UnNews:Clinton on the rebound, with McCain 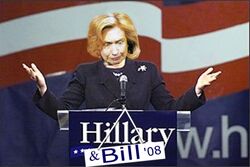 Hillary Clinton, the Chairperson of the Senate Sub-committee of Lesbian Economic Affairs

A HOTEL ROOM, New Hampshire -– It was a difficult week for Hillary Clinton, after an argument with little, known husband Bill put their already-strained relationship to the test (UnNews can, for the first time, exclusively break that recent marital problems stem from a clandestine affair the Senator’s husband has been having with Barrack Obama. While nothing was made public, the fact that Senator Clinton was seen in tears at a campaign event in the past week has made it an open secret that their marriage is on its last legs.

Perhaps more shocking, however, are reports from top Clinton aides that this presidential hopeful is “definitely rebounding,” and with no lower-profile man than fellow Senator John McCain.

The two were seen celebrating together on January 8th in the state of New Hampshire, and staffers from the two camps acknowledge that Clinton and McCain have both booked flights to exotic locations such as Detroit, Michigan and Charleston, South Carolina in the next few weeks.

Surprisingly, the spreading knowledge in political circles that McCain has caught Clinton’s eye seems to have affected former Massachusetts Governor Mitt Romney the most. According to UnNews sources, Romney repeatedly commented that he had “taken the silver, again,” on the 8th, the night Clinton and McCain were seen rendezvousing together. It may also be interesting to note that Romney too was placed in New Hampshire that evening.

Reportedly, Hillary Clinton is widely considered to be quite a catch. Former Arkansas Governor Mike Huckabee, whose diligent anorexia-fueled weight loss hasn’t yet made much of an impact, has mentioned that he hoped to be the one to “go face to face with Clinton.” But he’s not the only one making big changes to win Clinton’s attention– in 2007, Democrat John Edwards faced heat for trying to impress his Senate colleague with a $400 perm. The slicked-back, professional look, it was said, made Edwards remind Clinton too much of a “slimy politician, or glob of protoplasm.”

Though his feelings remain eternal, Edwards’s chances to win in this heated competition may prove more transient after receiving so little attention in New Hampshire. Huckabee, however, may fare better in the future, where contests will take place among the fragrant, swaying trees of Florida, where the gentle sounds of an acoustic guitar might more easily lead to that “face to face” time with Clinton.

Most disturbing may be rumors of Clinton and McCain’s “comeback kid,” allegations that imply the two enamored senators conceived a child in New Hampshire. If this is the case, it may link misinformation to the strange behavior of John McCain’s wife, Cindy; according to reports, she hasn’t seen her husband since the 8th and has made public appeals to President Bush to make every effort to bring him back from Iraq, clearly under the impression that McCain is a prisoner of war – again.