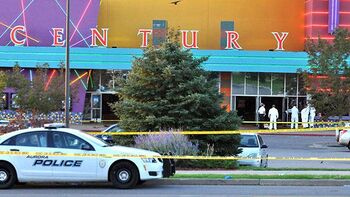 TINSEL TOWN, CA – In the wake of the tragic shootings of moviegoers attending a showing of The Dark Knight Rises, starring Christian Bale as Batman (aka “The Dark Knight”), Hollywood celebrities have poured out their heartfelt observations concerning the tragedy. “It's great theater,” Ellen Degenerate declared. “It's hard to beat Batman, especially at the box office,” Bale quipped, “but I think he [the alleged mass murderer] has done it.”

Even President Barack Obama got in on the act. His popularity and job approval ratings at an all-time low and fearing his rival Mitt Romney's “hug war chest,” Obama has agreed to pull the “negative ads” his campaign planned to air in Colorado, where the mass murders took place mere hours ago, from broadcasting, hoping that Romney, who is ahead in the polls, will do the same. “Let's bury the hatchet, Mitt,” Obama said, reaching out to his political nemesis.

Romney is “undecided” as to how to respond to Obama, although, privately, he said, “I have the momentum, and his stalling tactic is intended to buy him time. I'm thinking about burying the hatchet straight through his heart”

It is thought likely, among Romney's opponents, that the former Massachusetts governor will continue to press his attack against Obama's horrendous record as president and his handling of a failed economy, stupid.

“If so,” David Axelrod, Obama's campaign manager, said, “We will say that Romney is insensitive toward the victims of the shootings and their loved ones. He is more concerned, we'll say, with his campaign than he is with accepting the political truce the president has extended to him in this tragic hour.”

Twelve people were killed and fifty others were injured in the attack upon moviegoers as the killer, believing himself to be Batman's “worst nightmare,” the villainous Joker, opened fire in the theater after passing gas.

Celebrities, whose luxurious, wealthy lifestyles depend upon moviegoers' willingness to risk their lives to attend matinees featuring their latest films, sought to reassure their fans that it is “safe to go back in the water—or the theater,” as director Steven Spielberg phrased it.

Alyssa Milano tweeted, “OMG! What will this do to the box office!”

Katie Couric said, “This shooting in Colorado is beyond horrific. But it's great for the news.”

Geraldo Rivera observed, “Unbelievable! There's actually something even more sensational than I am!”

Jessica Simpson said, “I'd just like to hug all the victims and their families to my bosom, but my boobs, unfortunately, are too big.”

Snooki gushed, “I wish I could have been there!”

Melissa Gilbert admitted, “Watching the newscast was sadder than losing Dancing with the Stars.”

Whoopi Goldberg advised, “You want to know what I think? Catch me on the next edition of The View.”

More celebrity reactions to the terrible incident are expected as soon as stars sober up, exit rehab, or learn of the shootings from their agents or public relations managers.

“You ain't heard nothing yet,” Will Smith predicted.

Former CBS news anchor Dan Rather came out of retirement long enough to encourage Americans to have “courage.”