UnNews:Bush on Woodward's "State of Denial": No such book exists, says President 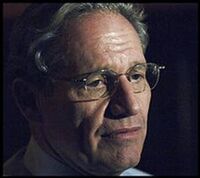 A pensive Bob Woodward, wondering if he should smoke that joint.

WASHINGTON DC -- At a press conference on Monday, President George W. Bush responded to inquiries about the recent Bob Woodward book, "State of Denial". The book paints Bush as a leader disconnected from reality, uninterested in hearing negative news, and surrounded by yes men. Said Bush in response, "No such book exists."

"I can say this indesputibably", said the president. "Dick and Karl both told me no such book was published Monday. A special CIA team assigned to the matter found that it is highly improbable that this "State of Denial" exists, that 700,000 copies were ordered by Simon and Schuster, or that this nonexistent book is the number one seller on Amazon.com. No way. So you can see, I am not in denial. Nuh-uh. If you say otherwise, you are just aiding the terrorists, and the freedom haters, and the evolutionists."

Bush was careful to state that he could not rule out the possibility that a new book on his administration was coming out. "That is, in fact, quite likely. After all, there is so much to be written about the strengths of my presidency- a presidency which is more popular and successful than any other presidency in recent history. Where to begin? There's the clarifaction of my vision thing. My keen decidership. My competent handling of the Iraq War, which has turned that war-torn country into a beacon of peace, freedom, and prosperitude. There is also-" and here the president made of one his hallmark dramatic pauses-"my keen handle on reality".

A Washington Post reporter asked if the book could sour the relationship between Woodward, who has previously enjoyed unparalleled access to the inner circles of the Bush administration, and the White House. The president felt this was unlikely. "That's just not possible. Because no such person as 'Bob Woodward' exists. Admittedly, I thought I remembered meeting him once or twice, but Rummy, Condi and Dick all said they had never heard of him. So how can he write his book about me being in perpetuous denialtude, when he doesn't even exist?" 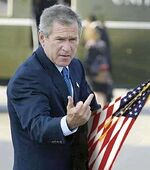 A New York Times reporter then asked about Woodward's characterization of the Bush Administration as a sort of imperial court, with people afraid of the consequences of speaking truth to power. "What are you talking about? Totally not true. I mean..." Bush then grew visibly flustered before yelling to the assembled press corps, "OFF WITH HIS HEAD!" At this point, an aide helpfully explained to Bush that he wasn't legally allowed to do that, at least not yet. "What are you talking about," Bush said, "I'm the decider, and I decide. Didn't we decide that? OK, fine. Declare him a terrorist, then we'll see about this 'Bill of Rights' stupidness. And dammit, did you ever send Colbert to Guantanamo for that incident at the dinner?"

As the offending reporter was forcibly removed from the room by military police armed with stun guns, Bush articulated his views on Iraq. "Yes, things might be a bit difficult now. I fully realize that. For instance, my advisors tell me that the Magic Gumdrop Lands in the northern part of the country are experiencing gumdrop shortages due to a lack of unicorns to pull the wagons. And the insurgency has recently allied itself with the Wizard of the Sunni Triangle, whose flying monkeys may pose a threat to our brave troops. But we can't let the negativitism of the media get us down, we have to look at the positive. For instance, we are not descending into a civil war, death squads are not running amuck, Iranian-backed fundamentalists are not seizing power, and the Sugar Puff Fairies are willing to negotiate with the Bog Goblins over access to the fields of lollipop bushes. Things are improving on a daily basis, and me and Rummy have a keen grasp of the situation and a plan to win. My fellow Americans, we have reached a turning point."