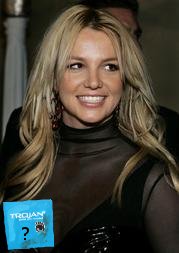 NEW YORK, New York-- Britney Spears and husband Kevin Federline are expecting their second and third children, but Mrs. Spears-Federline says, that it was all Unplanned, suggesting that members of Uncyclopedia had some sort of part in the spawning process.

"It just kind of happened one day after Kevin had squirted some of his semen into my gaping vagina," says Spears, 24.

Spears is 8 1/2 months pregnant with this child, and 7 3/4 months pregnant with a third child. The clueless parents don't know what birth control is, nor the sex of the child, although they suspect it may be either a boy or a girl. Spears says feels as though she has been pregnant for 20 years, and many believe she looks it, too.

Some concerned parents feel that Spears's fecundity gives girls as young as 14 the go-ahead to have intercourse, rather than encouraging them to just stick to oral sex.

In part of the Unplanning process, Kevin purposely forgot what a condom does or where it goes, although he was apparently still able to remember the location of Spears's twat.

The Trojan Condom Corporation's parent company, Church and Dwight Company (NYSE:FUK) has declined to comment on the lack of use of their product, but still said, "If Mr. Federline wants information on our products, he can visit us at analattack.com".

In response, Mr. Federline said incredulously, "I didn't know sex without condoms is 100% UNeffective in preventing pregnancies! Besides, who needs condoms? I have funny little balloons! Har-har!"

Spears has gained an unprecedented 78 kilos whilst pregnant, which is even a lot in real measurement units. As soon as the bun is out of the oven, she claims she is going to slim back down to her Baby Slap Me Around One More Time weight. She still admits an addiction to ice cream, chocolate, and sperm. "I love melting it and pouring it over my body to eat. It sounds disgusting, but it is so satisfying!"