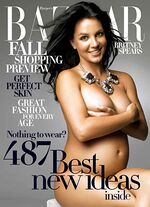 Amazingly, the now destitute singer remains popular enough to appear on the cover of a-list magazines, despite her lack of clothes or possessions

Los Angeles, CA -- Britney Spears, as seen by this exclusive photograph, has run out of money and has had to sell all her clothes. It has also been reported that the money she sold her clothes for was, accidentally, monopoly money.

"Whoops, I'm sure embarrassed," said a naked-as-a-jaybird Ms. Spears "I guess this is just one of those times in life where you know you'll look back and laugh someday. I hope."

Ms. Spears is attempting to continue her musical career but it is difficult for her to continue recording without funds, and many venues refuse to book a nude performer.

"This is one of those vicious circles, totally . . . how am I supposed to get clothes if I can't sing? Duh." Ms. Spears commented, as she walked past the library, exactly as the creator had intended a human being to look.

What caused Ms. Spears' money trouble remains unknown at this time, but there are rumors that she just forgot where it is. The money, that is.

"Oh well," she commented philosophically as she paused before blowing out a dandelion clock. "We're country."

Whether this all is just a publicity stunt remains an unknown, but far more plausible, explanation.

Thanks to a new cloning breakthrough, and a bold deal with Bird's Eye, it turns out that Britney will have a plentiful source of income that should easily get her through this "rough patch," and more!