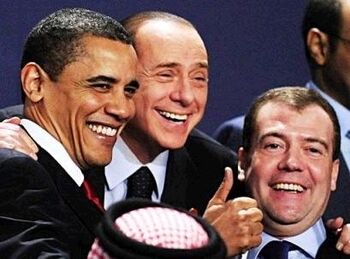 The face of Berlusconi as we would like to remember it: the face of a leader (centre).

ROME, Italy --The Prime Minister of Italy was rushed to hospital last night, following a shocking, unprovoked attack by a member of the public. Silvio Berlusconi was struck in the face by a man during a meet and greet at a rally in Milan. While initial reports, backed up by video and photographic evidence, suggested that damage was restricted to the nose and mouth, it has now emerged that the injury is much more serious.

Berlusconi's medical team have called in top surgeon Lance Carver from his specialist clinic in Los Angeles, California. The facial-injury expert has performed operations on dozens of high profile public figures, most notably Barry Manilow after he walked nose-first into a wall and Cher following a nasty infection of the cheekbone.

"The injury would initially appear to the layman to be centred around the nose and mouth," said Dr. Carver, "But these contusions have led to a falling in of other parts of the face. This has necessitated a surgical lifting of the affected areas, which we hope will ease the pressure on the collaginous implants we have inserted to maintain the structure of the mouth. Mr Berlusconi has sustained considerable damage and so we have also been forced to utilise medical botox to strengthen the structurally vital forehead region."

Mr. Berlusconi's first surgery last night was followed by a second period of high drama, as news leaked out that the 73 year old politician would require a transplant. Doctors embarked on a frenzy of phone calls and agonised searching, until, in the early hours of this morning, a suitable hair donor was found in Calabria. Follicologists now expect the prime minister to make a full recovery.

Berlusconi is still in hospital and is being attentively cared for by the best team of nurses in the country. Those closest to the premier have assured UnNews that these are the most skilled women that money can buy. The Italian leader is said to be in good spirits and is eager to return to normality. Ever the workaholic, Berlusconi has been vigorously engaged in state business from his hospital bed. It is expected that he will shortly appoint a new minister for health.