UnNews:Ballmer bids $2B for Clippers

Ballmer (right) announced his bid at a press conference, along with the jester who will supervise courtside mirth at half-time.

LOS ANGELES, California -- Steve Ballmer will bid $2 billion to buy the Los Angeles Clippers, in a deal agreed to by everyone except the team's owner.

The league has required current Clippers owner Donald Sterling to sell the team, following his shocking, public invitation to every African American not to come to the games, but merely screw around with his girlfriend and put video of it on Facebook.

Ballmer retired as CEO of Microsoft four months ago, has a personal net worth of $20 billion, and carries around the amount of the bid as pocket change, frequently flipping a couple million to waitresses and valets, just as tips.

Best of all, unlike Sterling, Ballmer is not a flaming racist. He did admit, in remarks that the mass media mistakenly attributed to Dallas Mavericks owner Mark Cuban, that whenever he is out for an after-dark stroll in Detroit and sees "one of them," he crosses to the other side of the street, "just because you can never be too safe." But Ballmer insisted that, when he ran Microsoft, he demanded that all his subordinates attend sensitivity training so as to not be the ogre that he is. 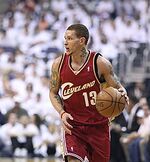 Players like Delonte West would have an instant niche under the Ballmer quota, serving as vital Fractional Negroes.

Reportedly, no owner in the NBA wants to deal with "those people," but every time they try to put their Utopian scheme into effect, a rogue owner signs all the black guys and wins the Finals. Ballmer has proposed league-wide quotas, limiting all the teams to 13% black players — the same proportion as in the American population. This works out to one-and-a-half blacks per roster, or a LeBron James and perhaps a Delonte West.

Other possible buyers for the Clippers include Magic Johnson, but he has stated he prefers his current role as spokesman for the HIV virus (which needs all the good press it can get). As the bid price represents 150 times what Mr. Sterling paid for the Clippers, President Obama has suggested that Mr. Sterling hold onto the team, lest he "increase income inequality." White House spokesman Art Carney said, "The President's focus right now is getting the name of the Washington Redskins changed. He's very angry about that and has started #FightRacismInAmerica."