UnNews:BBFC 'Giving up the Ghost' 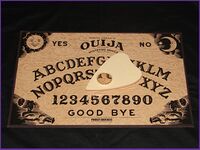 The government used this Ouiji board to summon the ghosts of the past, apparently they conferred to them a desire for giving up this lengthy struggle with consumers and media industry bodies 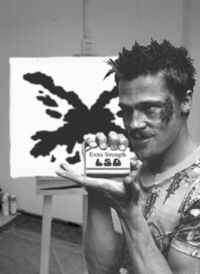 Popular games and films are becoming 'too adult' in nature to rationally regulate. Here is an example of the "Fight Club" computer game, which claims to reinforce masculinity along with education on chemistry.

BBFC (British Board of Film Classification) have announced today that they are giving up trying to censor potentially harmful material after the ghosts of John Trevelyan and Mary Whitehouse complained of a hostile media that attempted to reconcile personal responsibility with government meddling in the media.

Apparently Mary Whitehouse’s ‘black queen ghost’ was quite pleased to hear that the bitter and lengthy campaigning was over and that people could get on with their lives unhindered by regulation and intervention.

This comes after a Wednesday night séance encouraged by councils and government to listen to the perceived messages from the dead through Ouija boards and BBC Four documentaries. Those participating say there was clear encouragement of “laisser faire” attitudes and “ending promotion of moral panics” from the spirits. Apparently Mary Whitehouse commented during the séance,

However none of the claims from the spirits have been independently verified prompting criticism of the veracity of the reported comments, the BBFC remain pragmatic on their use of preternatural methods to make their decisions.

According to one member of the BBFC who wished to remain anonymous, “I wish I could say that we tried to operate a non-spiritual system, but like all government departments we’re often forced to resort to asking the dead as the living make little sense”.

Allegedly this technique is quite common and Andy Burnham, the culture secretary stated earlier today that, “We use many techniques to assess films and media and some of the do include ‘quack means’. it is just another way of pandering to the minorities and reactionarty voices of our society". Burnham also went onto say,

"We continue to maintain a status quo, however we have been constantly bogged down with complaints and the government claims that we confuse issues with our website aimed at A level students. This is the price you pay for attempting to appeal to the mob – as of today we just can’t be bothered anymore.”

Threats of an end to all regulation have been touted for years from British regulators and also the government which controls the 'independent' regulaters. Today’s announcement marks the end of lengthy argument at home and abroad within the film and gaming industries.

Overall the government has decreed the BBFC's actions admirable. The Culture secretary wnet on to say, “Yes we agree with the BBFC”, however when asked about any possible naysayer’s to the BBFC's new “light touch, fuck all” status, Burnham commented “yes we also agree with them as well”.

Many claim that regulators were motivated by corporate and artistic preussure, other parties claim that the BBFC had been solely motivated by archaic right wing ghosts; however most seem pleased that the regulater is taking a back seat on what has become a public decision making process.

Andy Burnham went on to say that “ from now on we won’t bother to regulate games with any kind of authority” as parents provide them for their children to enforce gender and social roles, and concurrently ‘educate’ better than schools do on the future lives of students and pupils.